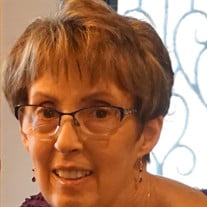 Gail Louise Arnold, age 75 of Omaha, died at Nebraska Methodist Hospital in Omaha on Wednesday, November 11, 2020. Gail was born and raised in North Platte, NE with her parents John and Velma, and her younger brother Mark. She went on to study at the University of Kearney where she graduated with a degree in Home Economics. She married her college sweetheart, David Arnold, and they both started teaching. Soon afterwards, Dave went to work for the FAA and a series of moves took them from Chadron, Scottsbluff, Oklahoma City, Grand Island and then Wichita, KS. Shortly after moving to Wichita, Gail was widowed and stayed in Kansas to selflessly raise their two children, Tim and Ann. In Kansas, she worked as a Home Economist for Sharp Microwave Corp., taught sewing classes, and worked as a substitute teacher. Later she began work as a day care center director in Goddard, KS and then went on to open and run All Saints Child Care Center in Wichita, KS for many years. She retired in 2011. She always had a craft or project that she was working on. She was director of the local 4-H group, watched every cross-country meet, track meet, and basketball game, and was a tireless supporter of both her children. She loved sewing, knitting, scrapbooking, jewelry making, home remodeling projects, gardening, baking, and socializing. After retiring in 2011, she moved to Elkhorn, NE to be near her daughter and her beloved twin grandsons. She watched over her grandsons before and after school and summer breaks. She loved going to watch them play soccer and basketball. She was active in her neighborhood Home Owner’s Association, Bunco, and a member of P.E.O. Just a couple of years ago she went from being the caregiver to the care receiver. An atypical form of Parkinson’s Disease crippled her body and stole her independence. She moved to assisted living a year ago and then long term care in August. Gail easily made friends everywhere she went. She was a great friend, neighbor, daughter, sister, mother, and grandmother. She was loved by many. She was preceded in death by: her parents, John and Velma Mills; and her husband, David Arnold. Gail is survived by: her son, Tim Arnold of Kansas City, MO and her daughter, Dr. Ann (Jason) Sullivan, along with their children, Jakob and Benjamin all of Elkhorn; as well as a brother, Mark Mills of North Platte, NE. Memorials can be made to: Parkinson's Foundation of the Heartland and left at the funeral home. The service will be webcast from this website.

Gail Louise Arnold, age 75 of Omaha, died at Nebraska Methodist Hospital in Omaha on Wednesday, November 11, 2020. Gail was born and raised in North Platte, NE with her parents John and Velma, and her younger brother Mark. She went on to study... View Obituary & Service Information

The family of Gail L Arnold created this Life Tributes page to make it easy to share your memories.

Send flowers to the Arnold family.