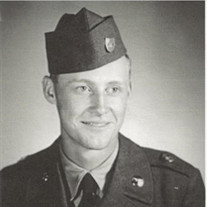 Galen Donley Olsberg was born at home near Junius, SD on August 19, 1933. He attended school in Curlew, IA where there were only TWO students in his High School graduating class. He participated in basketball and 4-H as a youth. He grew up on a farm a mile south of Curlew, and during his teen years was a hired hand at the neighboring farm of Evan Smith. After graduation Galen enlisted in the US Army, serving in Germany during the Korean War from 1952 – 1955. He was with the 7th Army 443 Ammunition Ordinance Company, then transferred to the 60th Ammunition Ordinance Company. He was quite proud of a Triumph TR2 automobile he brought back to the US from England after his honorable discharge. Galen then attended the University of South Dakota in Vermillion, majoring in geology. While there he was also employed by the Vermillion Police Force. After working briefly for Olsen Dodge and driving a cab in Omaha, he became an over-the-road trucker for many years with Omni and Hunt. He told many truck driving stories and had all the highways anywhere in the US committed to memory. He was very proud of a special ring he received for his outstanding safe driving record. Galen really loved ballroom dancing, even taking lessons at the Arthur Murray Dance Studio. Another passion was Sports Car Racing with his Datsun and going on Gymkhanas occasionally. Sometime in the 90’s his interest turned to working with trees, and he became a Certified Arborist, working in the Omaha area with his own business, “Galen’s Tree Trimming Inc.” His last wishes were to meet his long-lost son, and to have his siblings around him one last time. Both those wishes came true, and he was able to pass away peacefully in his sleep October 5, 2021 having attained the age of 88 years. Galen was preceded in death by parents, Edward Grieg Olsberg and Leah Dell (Lockwood) Olsberg; and sister, Janice Anita Olsberg. Survived by wife, Soen Nio “Lucy”; former wife, Cheryl; children: Kerri (Brett) Vicker, Ryndee (Kirk) Ryan, and Galen Ulrich; grandchildren: Daniel, Joshua, Dalton, and Wyatt; sisters, Vonnie Barglof and Laurie Shields; brother Verlyn Olsberg; and many nieces and nephews.

Galen Donley Olsberg was born at home near Junius, SD on August 19, 1933. He attended school in Curlew, IA where there were only TWO students in his High School graduating class. He participated in basketball and 4-H as a youth. He grew up on... View Obituary & Service Information

The family of Galen Donley Olsberg created this Life Tributes page to make it easy to share your memories.

Galen Donley Olsberg was born at home near Junius, SD on August...

Send flowers to the Olsberg family.