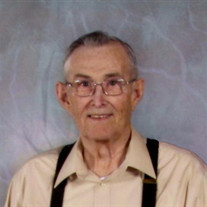 Memorials to Hospice House or Elkhorn Historical Society Gary Lee Bridges was born on January 24, 1938 in Loup City, Nebraska to Guy and Laura (Holmes) Bridges. He grew up in Hazard, Lakeside and Litchfield, attending grade school at Bloody Run country school, Hazard, Lakeside and Litchfield before graduating from Litchfield High School in 1956. As a young boy, Gary enjoyed hunting fishing and dancing. He kept busy working odd jobs in the summer and after school. Gary married Patricia Rasmussen on June 27, 1959 at St. Gabriel’s Catholic Church in Hazard, Nebraska and they were blessed with three children: Belinda, Kevin and Mitchell. Gary and Pat have raised their family in Chicago and Elkhorn. Gary worked for Burlington Railroad Signal Department for 5 years, traveling from Montana to Missouri before settling in Chicago. Later he worked as a cement finisher, partner in the Elkorner Bar and at the Elkhorn Public Schools before he retired in 2000. Gary still enjoyed fishing, hunting and camping. He was a Rainbow Dad, Little League Coach and was always active in the community. Gary served on the Elkhorn City Council for 16 years, Mayor of Elkhorn for 4 years, past Master of the Waterloo Masonic Lodge #102 A.F & A.M., Tangier Shrine, Elkhorn Eagles and Lions Club. During his time in City Government, Gary was instrumental in establishing a paid fire department and the building of the Bess Johnson Library. Gary treasured his 60 years of marriage with Pat and the joy of his children, grandchildren and most recently his great granddaughter. He was an avid Husker football fan, enjoyed fresh tomatoes and a cold red beer. Gary passed away on Thursday, August 29, 2019 at Hospice House in Omaha, Nebraska at the age of 81 years 7 months and 5 days. He was preceded in death by his parents Guy and Laura, brother George and sister Ilene. Gary is survived by his wife Pat “Patsy”; children Belinda Bridges of Elkhorn, Kevin and Patti of Millard and Mitch and Karen of Fremont. 4 grandchildren and 1 great granddaughter.

The family of Gary Lee Bridges created this Life Tributes page to make it easy to share your memories.

Send flowers to the Bridges family.