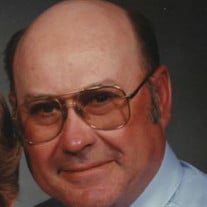 Gary Jacob Sass was born December 1, 1942 to Jacob H. and Sophie (Wesemann) Sass in Omaha, Nebraska. He was baptized April 20, 1943 and confirmed April 14, 1957 at Immanuel Lutheran Church in Benson. He attended grade school at District 67, then two years at Benson High School before moving to Elkhorn High School, where he graduated in May 1961. He served in the Army National Guard of Nebraska from 1964-1970. Gary was united in marriage to Patricia J. Johansen on April 22, 1972 by Reverend Norman Schroeder at Northwest Hills United Church of Christ. To this union five children were born—Robyn, Stacey, Christina, Ryan and Emily. They lived on the family farm at 129th and Maple St. in Omaha raising dairy cattle and crops until moving to their farm, north of Bennington. Farming was Gary’s way of life and he was a dairy farmer until 1999. Even after he retired from farming 10 years ago, he continued working alongside his son and puttered around the farm until he could no longer do so. Gary also liked to create things and when anything needed fixing around the farm, he would design and draw plans so he could build what he needed. Gary worked most of the time, but when he wasn’t working, he enjoyed fishing, coyote hunting, watching husker sports, and he was an avid Kansas City Royals fan. In 1999 he was diagnosed with superficial siderosis, which forced him to slow down. He continued working outside as much as he was able, but would enjoy games of Solitaire, the word jumble in the nightly newspaper, sudoku, and jigsaw puzzles. His mobility continued to decline and in August 2019 he moved to Arbor Care Center in Tekamah, Nebraska. Gary passed away on Thursday, July 30, 2020 at Arbor Care Center in Tekamah at the age of 77 years, 7 months, and 29 days. He was preceded in death by his parents. Gary is survived by his wife of 48 years Patty; daughter and son-in-law Robyn and Travis Dallegge of Omaha, Nebraska, daughter Stacey Spicer of Bennington, NE, daughter Christina Sass, son and daughter-in-law Ryan and Kelsey Sass, and daughter and son-in-law Emily and Travis McIntosh all of Blair, Nebraska. He is also survived by grandchildren Abby and Sydney Dallegge, Nikolas Spicer, Quinn, Joey, and Stevie Avila, and Blake, Sierra, and Eleanor McIntosh. His service will be webcasted starting at 11 am, Tuesday for those who wish to view the service and are unable to attend.

The family of Gary J. Sass created this Life Tributes page to make it easy to share your memories.

Send flowers to the Sass family.