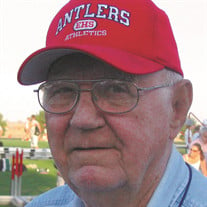 Memorials to Elkhorn Public School Foundation; Gene Marvin Kruger was born in April 6, 1924 in Fontanelle, Nebraska. He grew up in Arlington, Nebraska and graduated from Arlington High School in 1941. Growing up he was very active in athletics including basketball, track and baseball. Gene developed his love of fishing as a young boy. After high school, Gene attended Midland College in Fremont, Nebraska, earning his B.S. degree in 1946. While at Midland, Gene joined the United States Marine Corps. He rose to the rank of 2nd Lieutenant before being discharged as World War II ended. While he was in the Marine Corps, Gene was granted a furlough to marry his high school sweetheart, Ruth Elaine Wilkins on December 30, 1943. Gene and Ruth raised five sons: Jim, John, Jerry, Joe and Dave. They made their home in Fremont and Arlington before settling in Elkhorn in 1949. Gene always enjoyed fishing, whether in Nebraska, Minnesota or Montana. He was a founder and proud member of the Alcoholics Anonymous program in Elkhorn in 1981. As the years added up, Gene remained active with his friends, playing cards, cribbage and he was always up for “watching the game”. He developed a keen taste for root beer floats. So much so that the sweet treat was added to the menu at his assisted living facility. Gene’s true passion was teaching and coaching. He started his career in 1946 in Arlington. In 1949 he and his family moved to Elkhorn where he assumed head coaching responsibilities. Gene and Ruth left their teaching careers in 1968 and founded Big Red Scorebooks. First run out of their home, the business quickly outgrew their basement. The scorebooks business was then moved to the current downtown Elkhorn location. Son Jerry continues to manage Big Red Scorebooks. Although Gene was officially retired from coaching, he remained active in Elkhorn High School Sports. He volunteered as a honorary assistant coach for the girl’s basketball team from 2006 to 2018. Gene passed away on October 20, 2019 at Elk Ridge Assisted Living in Elkhorn at the age of 95 years, 6 months and 14 days. He was preceded in death by his wife Ruth, brother Loren and sister Bobbi. Gene is survived by sons and daughters-in-law Jim and Mary of Stayton, OR; John and Lisa of LaVista, NE; Jerry and Corina of Omaha; Joe and Peg of North Platte, NE and Dave and Cathy Dunham of Bennington, KS. brother Gary (Judy) Knoell of Fremont. Sister Joyce Gumb of Fremont. Cherished friend Darlene Hazard of Omaha; 14 grandchildren Eric and Emily Kruger, Michael Kruger, Sara Kruger, Savanna and Frank Hempel, Jeremy, Nathan and Joshua Dunham, Britanny and Caleb Peasinger, Breanna and Dave Kruger, Drew and Kristin Holzer and Taylor Holzer; 8 great grandchildren Aria, Barrett, Cogan and Daxton Peasinger, Gage, Catelyn, Kristopher and Eli Holzer and the family is anxiously awaiting the arrival of two more great grandsons.

Memorials to Elkhorn Public School Foundation; Gene Marvin Kruger was born in April 6, 1924 in Fontanelle, Nebraska. He grew up in Arlington, Nebraska and graduated from Arlington High School in 1941. Growing up he was very active in athletics... View Obituary & Service Information

The family of Gene Marvin Kruger created this Life Tributes page to make it easy to share your memories.

Send flowers to the Kruger family.