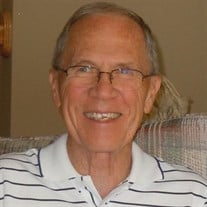 Memorials to Alzheimer’s Assc or Elks Lodge National Foundation. George Elden Bamsey was born on September 19, 1941 in Wall, South Dakota to Lynden and Clara (Lurz) Bamsey. He grew up in Wall and Presho, South Dakota and Chadron, Nebraska. George graduated from Assumption Academy in Chadron, Nebraska in 1959 before graduating from Chadron State College in 1963 with a Bachelor of Science. As a young boy, George enjoyed playing sports especially basketball, football and track and was active in Boy Scouts, earning his Eagle Scout designation. George married Rhonda Atchison on September 1, 1962 at St. Patrick’s Catholic Church in Chadron, Nebraska. George and Rhonda started their life together in Rapid City, South Dakota. They moved to Mitchell, South Dakota and were blessed with one daughter, Jennifer. In 1988 the family moved to Omaha, Nebraska. George spent his entire career in medical laboratory sciences with his last employment at Nebraska Medicine in Omaha. George enjoyed many hobbies including golf, fishing, photography, reading, birdwatching and riding his motorcycle. George had a passion for music and playing his guitar. He was an avid sports fan with a love for the Huskers and Creighton Blue Jays. George was a loving and devoted husband, father, uncle and grandfather. He had a contagious smile and loved a good pun. George passed away on March 22, 2019 at Edgewood Vista Assisted Living in Omaha, Nebraska at the age of 77. He was preceded in death by his parents Lynden and Clara. George is survived by his wife Rhonda, daughter and son-in-law Jennifer and Chad Rutar, granddaughters Josie and Savannah, brother and sister-in-law Jim and Bonnie Bamsey and numerous nieces and nephews.

The family of George E. Bamsey created this Life Tributes page to make it easy to share your memories.

Send flowers to the Bamsey family.