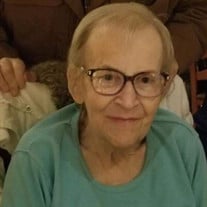 Gladys Alma (Fedde) Gibson was born February 28, 1939 in Elkhorn, Nebraska to Earl and Alma (Dohse) Fedde. Gladys grew up in Elkhorn, and attended school in Elkhorn, graduating from Elkhorn High School in 1956. Gladys married Harold Glen Gibson on May 16, 1970 in Omaha, Nebraska. Gladys became the proud mother of Rick, Tracy, Kimberly, Pat, Kelli, Jamie, and Ashley, as well as step mom to Harold’s sons Ronnie and Gary. The family made their home in Kentucky, Tennesee, and Nebraska. Gladys worked for the telephone company, and for a few years as a stenographer at Mutual of Omaha, but most of all, she was mom and grandma to her family. Gladys liked listening to country music, sipping a Diet Pepsi, or a meal at Arby’s or Long John Silver’s. She loved sports, be it football, baseball or basketball, and she was a die-hard Husker fan. She kept her mind busy with crossword puzzles, and hand-held games like Tetris and Solitaire (as well as playing solitaire with her deck of cards). She would do cross stitch, and could often be found watching crime dramas on her TV. Gladys made an amazing potato salad, but also loved her sweets. She even kept a drawer full of Little Debbie snacks for the grandkids! Gladys died September 22, 2020 at Nye Pointe Care Center in Fremont, Nebraska at the age of 81 years, 6 months, and 23 days. She was preceded in death by her parents Earl and Alma (Dohse) Fedde, husband Harold “Glen” Gibson, brother William, and sisters Mabel and Della. Gladys is survived by children; Richard “Rick” Fedde of Bellevue, NE, Ronnie (Andrea) Gibson of Hermitage, TN, Gary Gibson of Franklin, KY, Tracy (Dan) Klein of Fremont, NE, Kimberly Gibson of Fremont, NE, Patrick Gibson of Fremont, NE, Kelli (Rodney) Cox of West Point, NE, Jamie Gibson of Fremont, NE, and Ashley (Adam) Papst of Fremont, NE, 19 grandchildren, 5 great grandchildren, brother Ken (Jane) Fedde of Elkhorn, NE, and sister Wilma Wrich of Applington, IA.

The family of Gladys Alma Gibson created this Life Tributes page to make it easy to share your memories.

Send flowers to the Gibson family.