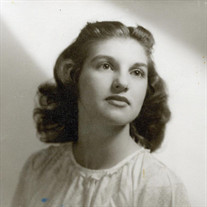 Grace Schroeder, age 90 of Elkhorn, passed away on Wednesday, January 20, 2021. She was preceded in death by: her parents, Vincent and Barbara Pistone; and her husband, Norman Schroeder. Grace is survived by: her daughter, Gena Sikes; a brother: Frank (Sandra) Pistone; grandchildren, Laine (Dean) Drake, Chase Jansen, Lauren Robins, and Chandler Jansen; great grandchildren, Dawson Drake, Noah Jansen, and Willa Robins. Gracie was the first-born child to Vincent and Barbara Pistone on October 2, 1930, in Omaha, NE. Gracie was a creative and inquisitive child, who enjoyed any activity involving working with her hands. She developed an early affinity for art and design when her father built her a nook in the upstairs of their home where she could draw, paint, and sew. Gracie’s love of art continued as a young adult when she sold her first painting in her grandfather’s shoe shop. Her incredible talent for art would continue throughout her life; she was a founding member of the Omaha Artists of which she was a member for over 40 years, she was a fixture at local art shows, and routinely guest taught art classes at College of Saint Mary and Creighton University in Omaha, NE. Gracie was best known for her Sumi watercolors, an Asian ink-based form of art media. She also had her Sumi paintings displayed both across the United States as well as Internationally and wasa member of the Sumi Society for nearly 40 years. Gracie met the love of her life, Norm Schroeder, whilst both were in high school. Gracie and Norm married in an intimate ceremony on December 26, 1948. The happy couple welcomed their only child, Gena, in 1949. Gracie and Norm were an unstoppable couple; there was nothing they could not accomplish together. They did absolutely everything with each other; when Norm was building their home in Elkhorn, Gracie was by his side lifting blocks and holding her own. Gracie and Norm always supported one another, and even though they had their share of difficult times, they always chose each other. They left an indelible example of marriage to follow for their child and grandchildren. She was heartbroken when Norm passed away, but there is comfort knowing Gracie and Norm are now together, again. Per Gracie’s wishes, family will welcome friends and loved ones at 1 pm, Saturday, May 22 graveside service at the Elkhorn Cemetery. In leu of flowers, any memorials may be made in Gracie’s honor to the American-Italian Heritage Society in Omaha, NE, or the Omaha Artists Association.

Grace Schroeder, age 90 of Elkhorn, passed away on Wednesday, January 20, 2021. She was preceded in death by: her parents, Vincent and Barbara Pistone; and her husband, Norman Schroeder. Grace is survived by: her daughter, Gena Sikes; a... View Obituary & Service Information

The family of Grace Jean Schroeder created this Life Tributes page to make it easy to share your memories.

Grace Schroeder, age 90 of Elkhorn, passed away on Wednesday,...

Send flowers to the Schroeder family.