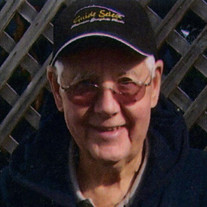 Harold quietly passed away on the morning of December 28th, 2021 at the age of 99 in Omaha, NE. Harold was born at home on the third of March 1922 in Richland, MI to Ray and Bernice (Dhaenans) Chadderdon. He was the second of 8 children. He and Mary Konecny were married on the 30th of November, 1946. Mary passed away on May 29th, 2021, just a few months short of her 101st birthday and their 75th anniversary. Harold and Mary had 5 children, Bill-deceased (Kathy) Chadderdon in Omaha, NE, Bob (LeeAnn) Chadderdon in Wausua, WI, Cathie (Tom) Malone in Omaha, NE, Tom (Andrea) Chadderdon in Cedar Rapids, IA, and Steve (Carolyn) Chadderdon in Madison, WI. Harold was preceded in death by two brothers and two sisters, his wife Mary, and son Bill. He is survived by three sisters, Vera Russell, Margaret Stafford, Sr. Janet Chadderdon and brother-in-law Gene Burgwald in Kalamazoo, MI. Harold and Mary are also survived by 13 grandchildren, 25 great grandchildren, and 9 great great grandchildren. He served in the Army Air Corps during WW II on the island of Tinian as a mechanic on B29s. His specialty was maintenance and sighting of the gun turrets. After the war he worked as an aircraft mechanic and then as a maintenance inspector for the Federal Aviation Agency(FAA). His work with the FAA took him to Lincoln, NE for 14 years and to Kansas City, MO for 9 years. He and Mary then retired to St Joseph, MI for 33 years. Harold and Mary spent their last 6 year in Omaha, NE. Harold’s passions in life included his extended family, traveling with his wife and other friends, fishing, hunting and tennis. He attended all of his grandchildren’s graduations and weddings, was a longtime volunteer in salmon stocking programs for Lake Michigan with the Steelheaders Club, and hunter safety training with the Sportsmans Club. He played tennis until age 90 and was able to regularly defeat his sons and son-in-law until his mid 80s. He had a reputation for being able to do almost anything and fix almost anything that he put his mind to. A wake service will be held at Reichmuth funeral home the evening of April 21, 2022 at 5 pm with interment at the Omaha National Cemetery at 9 am on April 22th followed by the funeral service at Mary Our Queen Church in Omaha at 11 am. The funeral will be live streamed by Mary Our Queen at https://vimeo.com/event/2037510 Memorials are suggested to Congregation of St. Joseph, Attn: Sr. Pamela Owen CSJ9, 2929 Nazareth Rd, Kalamazoo MI 49048 Reichmuth Funeral Home 21901 W. Maple Rd. 402-289-2222

Harold quietly passed away on the morning of December 28th, 2021 at the age of 99 in Omaha, NE. Harold was born at home on the third of March 1922 in Richland, MI to Ray and Bernice (Dhaenans) Chadderdon. He was the second of 8 children. He... View Obituary & Service Information

The family of Harold Paul Chadderdon created this Life Tributes page to make it easy to share your memories.

Harold quietly passed away on the morning of December 28th, 2021...

Send flowers to the Chadderdon family.