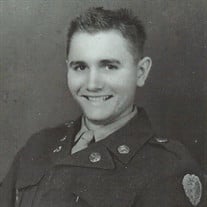 Memorials to Arbor Day Foundation, Columbus First United Methodist and Pleasanton United Methodist. Harold Ray Ritter December 11, 1927-October 27, 2021 Harold Ray Ritter, a member of the rapidly declining Greatest Generation, died peacefully on October 27, 2021 at Hillcrest Millard. Harold was the 3rd of six children born to Charles Ritter and Esther Rodehorst Ritter. His siblings include an infant brother who died at birth, brother Dale Ritter, sister Mae Ritter Lange, brother Carrell Ritter and sister Sharon Ritter Sands. Harold was born near Pleasanton, Nebraska and grew up there on the family farm south of town. Harold attended Sun Flower Grade School and Pleasanton High School. Harold enlisted in the Army and was part of the Occupation Forces of Japan following World War II. He served as company clerk at Yokohama, Japan. Following his discharge from the army he returned to his home town of Pleasanton. He was married to Elizabeth Marie Rone in 1949. They were the parents of six children, Bruce Rodney, Brenda Rae, Billy Reese, Bradley Roger, Beth Rene and Barbara Rochelle. Harold always had a desire to be a farmer, and did so on the side for many years, but made his living in his young adult years as the owner and operator of Ritter Oil Company and Tank Wagon Service. Later he took employment at both Rockwell Manufacturing and Eaton Corporation in Kearney where he ran the heat treat furnaces. His hobbies included his love of cars and gardening and tree planting. He planted well over 1500 trees in his lifetime and particularly loved planting fruit trees. His gardens were well known for his special yellow watermelon, which he gave away to “help atone for my youth when several watermelon may have come into my possession.” One year he kept track of the watermelons he gave away and recorded giving 292 melons that season. He spent the first 13 years of his retirement in Melbourne Beach, Florida and spent his time fishing, flying kites on the beach, golfing and riding his bike. While in Florida he was married to Elayne Nickman Brown. Later in his retirement he moved to Columbus, Nebraska to be near family and continued his hobby of biking, fruit trees and watermelon—including his special square melon. Harold also liked to take epic cross country car trips without using a map or traveling on an Interstate Highway. He was a faithful member of the Pleasanton United Methodist Church and Columbus First United Methodist Church. He was preceded in death by his parents, brothers Dale and Carrell and sister Mae. He is survived by sister Sharon and children Bruce and Irasema Ritter of Fayetteville, Arkansas, Joe and Brenda Costanza of Friendswood, Texas, Rev. Bill and Debbie Ritter of Omaha, Nebraska, Brad and Cathy Ritter of Denver, Colorado, Drs. Alan Osborn and Beth Ritter of Omaha and Todd and Barb Ibach of Sumner, Nebraska. He is also survived by grandchildren, Aaron, Ellen, Brett, Briana, Blake, Zac, Issac, Joey, Jillian, Neal, Molly, Sam, Ian,Lauren, Rachel, and Colin. Great grandchildren are Brennan, Briar, Braxton, Xander, Reese, Aubrey, Fianna, Lutreo, William and Adeline. Harold is also survived by friend Jane Graham of Columbus.

The family of Harold Ray Ritter created this Life Tributes page to make it easy to share your memories.

Send flowers to the Ritter family.