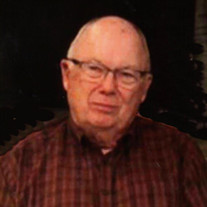 Harvey James Hadden, age 81 of Omaha, died at Hospice House in Omaha on Tuesday, April 20, 2021. He was the son of James and Rita Irene Hadden, was born on February 15, 1940, in Onawa, Iowa. He grew up with a younger brother, Harold, on a farm west of Soldier, Iowa. Harvey began his education in a one-room schoolhouse, walking across the fields with his three older cousins. After two years in the country school, he completed his education in the town of Soldier where he competed in basketball and baseball. He was active in 4-H and showed champion hogs and calves at county and state fairs. After high school, Harvey attended Wayne State College, majoring in Social Sciences. It was there he met his future wife, Barbara Nuckolls. They married in 1961 while both were still students at Wayne. In 1962 they started teaching in Iowa. It was there that their first child, Jennifer Lee was born. After three years they moved to Omaha where their second daughter, Kimberly Sue, was born. Harvey started teaching with Omaha Public Schools where he remained until retirement in 1996. In 1967 his son, Jeffrey James, was born and his family was complete. Even after moving to the city, Harvey continued his love of farming and nature. Every year he tended to a large garden as well as his trees and many flowerbeds. He loved to share the bounty of his garden with friends and family. Harvey always loved sports, both participating and as a spectator. He loved playing cards and later in life took up golf. His greatest joy was watching his five grandsons participate in all their sports and extra-curricular activities, travelling all across the U.S. to see them compete. After taking early retirement, He and Barbara traveled extensively throughout the United States and on many cruises. Alaska was his favorite travel destination! Harvey is survived by his wife of nearly 60 years, Barbara Hadden, daughters, Jennifer (Rick) Bohnhoff and Kimberly Valetski, son, Jeffrey (Kristy) Hadden and his five grandsons, Michael Bohnhoff, Matthew Bohnhoff, Ethan Valetski, Christian Hadden and Joshua Hadden and brother, Harold Hadden of La Mars, Iowa, as well as many nieces, nephews and cousins. He was preceded in death by his parents.

Harvey James Hadden, age 81 of Omaha, died at Hospice House in Omaha on Tuesday, April 20, 2021. He was the son of James and Rita Irene Hadden, was born on February 15, 1940, in Onawa, Iowa. He grew up with a younger brother, Harold, on a... View Obituary & Service Information

Send flowers to the Hadden family.