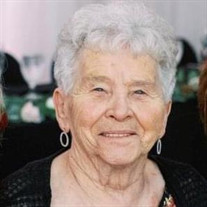 Helen E. (Sass) Braesch was born February 27, 1936 in Omaha, Nebraska to William and Lora (Frost) Sass. Helen was both baptized and confirmed at St. John’s Lutheran Church in Bennington, Nebraska. She attended schools in Elkhorn, and graduated from Elkhorn High School in 1953. Helen married Duane Braesch on January 16, 1954 at St. John’s Lutheran Church in Bennington, and they were blessed with five children; Vicky, Jackie, Julie, Dan, and Lori. Helen and Duane lived in Bennington before moving to a farm north of Bennington, where Helen has been for the past 50 years. Duane preceded Helen in death in August 2015. Helen worked as a bookkeeper for various Bennington businesses throughout the years, and drove the school bus for Bennington Public Schools for nearly 20 years, but most of all, Helen was just mom. She enjoyed getting together with the Girlie Club and the Women’s Club in Bennington, and she gave back by teaching Sunday School and helping with funeral lunches at St. John’s. Helen will be remembered as a fun, conservative, easy-going woman. She was a survivor from an early age; dealing with polio as a young girl, and was extremely selfless; often sacrificing of herself for the good of all others. She enjoyed baking cookies, and never said no to a trip to the casino. She liked Chinese food, and was always ready for a good cup of coffee and good conversation. She was a good sport, and was always up for anything, but most of all, Helen cherished her grandkids and great grandkids. Helen died on January 6, 2022 at Methodist Hospital in Omaha, Nebraska at the age of 85 years, 10 months, and 10 days. She was preceded in death by her parents Bill & Lora Sass, husband Duane, daughter Lori, great grandson Max, and son-in-law Dwayne Pruess. Helen is survived by her daughters Vicky Pruess, Jackie (Bill) Weidner, and Julie Rothermund (Keith Rahlfs), her son Dan (Marilee) Braesch, 11 grandchildren, 16 great grandchildren, 3 great-great grandchildren, brother Walt (Gloria) Sass, and sister Sylvia Green. Funeral service 11 AM Wednesday at Bethany Lutheran Church, Elkhorn. Interment Prairie View Cemetery. Visitation Tuesday, Noon to 7 PM with family receiving friends from 5-7 PM at Reichmuth Funeral Home, Elkhorn. Memorials to the family for later designation.

Helen E. (Sass) Braesch was born February 27, 1936 in Omaha, Nebraska to William and Lora (Frost) Sass. Helen was both baptized and confirmed at St. John&#8217;s Lutheran Church in Bennington, Nebraska. She attended schools in Elkhorn, and... View Obituary & Service Information

The family of Helen E. Braesch created this Life Tributes page to make it easy to share your memories.

Send flowers to the Braesch family.