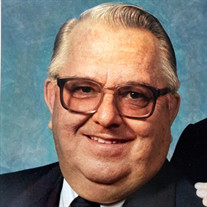 Herman Keith Krahmer entered into rest on Saturday, October 23, 2021 at his home in Yutan, Nebraska. Herman “Keith” was born January 3, 1938 to Gustav and Ethel (Steele) Krahmer in Fremont, Nebraska. He graduated from Yutan High School in 1955, and attended Midland College in Fremont, Nebraska, earning a Bachelor’s degree in education and sociology in 1960. After earning his bachelor’s degree, he entered the Central Theological Lutheran Seminary in Fremont, Nebraska, prior to entering the United States Army. Herman met Myra Frances Senstock and they married October 15, 1961. This 59 year, 8 month union brought together 5 daughters; Danielle, Angeline, DeAnna, Analisa, and Debbie, 5 grandchildren and 2 great grandchildren. He proved himself to be a devoted husband, dad, grandpa, and great grandpa. He entered into the United States Army in 1962, and was stationed in San Antonio, Texas until he was honorably discharged in 1964. Keith was proud of his service, and was a member of the Yutan Veterans of Foreign Wars, serving as the Post commander from 2009 to 2010. Prior to becoming commander of VFW Post 262, he served as the treasurer for many years. He was often called to play Taps via the bugle at many military funerals. He continued this until his health limited his ability to provide this honor. Keith worked for the Union Pacific Railroad beginning in 1966. He retired from management at UP in 1997. He was a fan of Gospel music, and especially enjoyed the Gaither Band and Gaither Brothers. He cherished his family above all, and cherished his ancestral genealogy. He spent many years as president of the family reunions. He could often be found sipping on a cold Pepsi or Dr. Pepper, and snacking on Rice Krispy treats. Keith was an avid gardener. He took great care to grow and nurture his vegetable garden and orchard, much like he nurtured his family. He was very generous with the produce from his garden, often sharing with friends and neighbors around Yutan, and even donating a number of items to local care centers, so the residents could have fresh produce. Keith tended his garden for many years, but as his and Myra’s health deteriorated, so did his garden. It became overgrown, but not before some of the trees could be taken down, and the wood donated to different local BBQ restaurants, so that they could continue the legacy Keith began. Keith had a strong will to live, and that was fostered from an early age. He developed Scarlet Fever as a child, and his doctors sent him home to die, but he survived. Later in his life, in October 2001, Keith survived a heart attack, and underwent a 6 graft heart bypass. Typically, the life expectancy following such an invasive procedure is 5 years, but Keith was determined to live life, and be present for his family. He survived 20 years! That will to go on helped him these last few months after Myra passed away, as Keith was determined to show he could remain in his home, and care for himself as much as possible. Keith was preceded in death by his wife Myra, parents Gustav and Ethel, and brothers Norman and Gary. He is survived by his daughters and sons-in-law Danielle (Steve) Yearout of Yutan, Angeline (Ron) Sladek of Colon, DeAnna (Dennis) Persinger of Omaha, Analisa Krahmer of Omaha, and Debralee Krahmer (Charles Cook) of Hamilton, NY, 5 grandchildren, 2 great grandchildren, sisters Bonnie Kaspar (Art) of Lincoln, NE, and Nancy Krahmer of MO, and sisters-in-law Mary Ann Krahmer of Kaufman, TX and Norma Jean Krahmer of Elkhorn. Funeral service 10:30 AM Thursday, St. John’s Lutheran Church, Yutan. Interment with military honors to follow at Hollst Lawn Cemetery, Yutan. Visitation Wednesday 5-7 PM at the funeral home in Yutan. Memorials to the family for future designation.

The family of Herman Keith Krahmer created this Life Tributes page to make it easy to share your memories.

Send flowers to the Krahmer family.