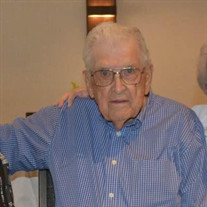 Howard Christian Denker was born on May 15, 1922 to Christian and Magdalene Denker. He grew up on the farm at 180th and Center. He attended school in rural Douglas County and graduated from Elkhorn High School in 1939. As a young boy, Howard worked with his family on the farm. When Howard could get away from the farm, he would go to the Music Box in Omaha where he met Lois Kinney. Lois taught Howard how to dance, which was a long-time tradition for the two of them. Howard and Lois were married on September 24, 1944, in Overland Park, Kansas. They enjoyed 71 years of marriage and were blessed with four children: Howard, Jr., Diane, Julie, and Kevin. Howard and Lois raised their family and always lived in the Elkhorn and Omaha areas. Shortly after marrying Lois, Howard entered the Navy on February 27, 1945. Upon returning from the war, he started farming. Farming was the love of his life other than Lois. Farming involved many different types of crops and livestock over the years. Howard was known for the sweet corn he grew. Many bags of sweet corn were put in the freezer each year from his sweet corn patches. During the off times of farming, Howard worked at Continental Can and Armour Packing Plant. He was also active in organizations: Farm Bureau, Grange, Legion Club, VFW, and his church, Bethany Lutheran, where he served on the church council. He was the longest-living member of Bethany Lutheran church. Howard also loved to garden growing a variety of different types of produce - watermelon, cucumbers, pumpkins, tomatoes, rhubarb, and fruit trees to name a few. Grandchildren were always involved in the gardening. His family was a major love of his life. He loved his children, grandchildren, and great-grandchildren. He loved attending their events and was proud of their accomplishments. Many grandchildren took a ride on the tractor over the years. Howard loved talking about farming and agriculture. He would be easily drawn into a conversation with fellow farmers. After retiring from farming at the young age of 85, Howard bought two farms in Iowa where he loved to visit and ride in the combine. He sold one farm, but continued to manage the other farm to his death, making improvements on the farm ground. Howard had a quick wit and a strong sense of humor. His eyes would twinkle and he would smile and laugh when he would share a story or joke or enjoy a laugh with family and friends. Howard was an avid sports fan. He was a basketball player on his high school team and he followed Nebraska basketball, win or lose. He also followed Nebraska football, Kansas City Royals Baseball and the Kansas City Chiefs. Howard and Lois attended many Nebraska basketball games as season ticket holders. He would also watch the games on TV with his son, Kevin, and was always ready to analyze the game after the fact. Howard was a very independent man. After Lois passed in 2016, he stayed in his home in Elkhorn until he moved into Independent Living, where he continued to make new friends, visit the Legion Post 1, and even dance! He took pride in the fact that he leased a new car for himself at age 98. Howard passed away on Monday, January 24, 2022 at Brookestone Meadows, with family at his side at the age of 99 years young. Preceded in death by his wife, Lois; son, Kevin; sisters, Darlene Andersen, Helen Smith, and brother, Chester Denker. Survived by son and daughter-in-law, Howard, Jr. and Mary of Omaha; daughters and sons-in-law, Diane and Harlan Falk of Omaha and Julie and Tom Kozisek of Crete, NE; daughter-in-law, Jean Denker of Omaha; 8 grandchildren, 11 great-grandchildren; sister, Marge Grabow of Omaha; and brother-in-law, Carl and Sue Kinney of Edmund, Oklahoma. Funeral service 11 AM Saturday, Bethany Lutheran Church, Elkhorn. Interment with military honors at Mt. Auburn Cemetery. Visitation Friday from 5-7 PM at Reichmuth Funeral Home, Elkhorn. Memorials to Bethany Lutheran Church, or American Legion Post 1, Omaha.

Howard Christian Denker was born on May 15, 1922 to Christian and Magdalene Denker. He grew up on the farm at 180th and Center. He attended school in rural Douglas County and graduated from Elkhorn High School in 1939. As a young boy, Howard... View Obituary & Service Information

The family of Howard Christian Denker created this Life Tributes page to make it easy to share your memories.

Send flowers to the Denker family.