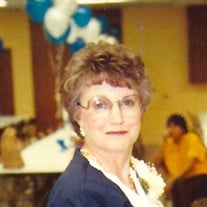 Memorials to the Wounded Warrior Project. Irma Jeanne (Bennett) Hopkins was born on December 11, 1934 to Gordon and Violet (Casebolt) Bennett in Cainsville, Missouri. Irma grew up on the farm, attending grade school and graduating from Cainsville High School in 1953. As a young girl, Irma enjoyed horseback riding, dancing, reading, and, according to her brother, ‘boys!’ Irma traveled to Des Moines, Iowa following graduation and later moved to Omaha after starting her family. She married Leo O’Brien in August of 1956, and to this union, three children were born: Steve, Tim, and Cheryl before Leo passed away in 1979. Irma met Ernie Hopkins, and the two were married in October of 1980. To no one’s surprise, Irma treated her many step children and grandchildren as her own. Along with raising her growing family, Irma worked as a keypunch operator for several companies over the course of 20+ years. She enjoyed staying active with bowling and golf as well as crocheting, reading, and playing cards in her multiple bridge clubs. She listened to country music, ate ice cream, and liked cheering on the Huskers. However, Irma’s favorite thing was being a grandma and attending her grandchildren’s events, even if she was not a big fan of the sport. She was neat and always aiming to please, but she certainly had a feisty side too. Everyone loved her! Irma was always concerned about her family. She had a kind, selfless heart that was willing to make sacrifices for others. Irma passed away on Saturday, May 11, 2019 at Marquis Place in Elkhorn, Nebraska at the age of 84 years and 5 months. She was preceded in death by son Tim O’Brien, step-daughter Linda Hopkins, grandson Vincent O’Brien, first husband Leo O’Brien and parents Gordon & Violet Bennett. Irma is survived by her husband Ernie of 39 years; children: Steve (Lisa) O’Brien of Ottumwa, IA, Cheryl (Mike) Ozmun of Elkhorn, Karen (Gary) Bates of Overland Park, KS, Ellen Rogers of Omaha, Laura (Allan) Uettwiller of Omaha, Paul (Deb) Hopkins of Omaha and Mike (Terrie) Hopkins of Omaha; daughter-in-law, Sue O’Brien of Creston, IA; 23 grandchildren; 16 great-grandchildren; and brother Gerald (Susie) Bennett of Council Bluffs, IA.

Memorials to the Wounded Warrior Project. Irma Jeanne (Bennett) Hopkins was born on December 11, 1934 to Gordon and Violet (Casebolt) Bennett in Cainsville, Missouri. Irma grew up on the farm, attending grade school and graduating from Cainsville... View Obituary & Service Information

The family of Irma Jeanne Hopkins created this Life Tributes page to make it easy to share your memories.

Memorials to the Wounded Warrior Project.

Send flowers to the Hopkins family.