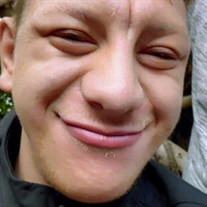 Jack Kallhoff, age 20 of Omaha, died at his home with his family on Tuesday, June 23, 2020. He was born the son of Cary Kallhoff and Nicole (Leonard) Brown on August 30, 1999 in Omaha. Jack was gentle, kind and loving to everyone he met. Even during all the times he was being poked or prodded in the hospital, he was never upset with them. He would know right away where he was and would start using all of his words to let us know he didn’t want to be there, like “home” or “abye bye”, but never angry. He made our family into what we are today. His parents learned to fight for him when medical professionals said, no and to think nothing is impossible so everything is worth trying. He helped us all to be more patient with others, accepting of others and what’s really important in life. For every one of his physical deficits he was perfect at heart. He never judged anyone based on the way they looked or what they could give him. He never wanted any gifts for birthdays or holidays, just to be with you. Even though he didn’t have very many words, the looks on his face told you everything. His favorite things in the world were to snuggle his Uh, oh pooh bear, walk, sit in the front window and watch whatever was happening outside and being outside just sitting with you. He also loved his grandma singing Jesus loves you and his grandpa’s bath time. He let his brother and sisters climb on him and he had a special look, smile or laugh for every family member. He said thank you and love you so sweetly that it almost felt like you didn’t deserve such gratitude He was preceded in death by: his paternal grandfather, Milton Kallhoff. Jack is survived by: his mother, Nicole (Corey) Brown; father, Cary (Theresa) Kallhoff; sisters, Krystyn, Meghan, Jamie Kallhoff and Jade Brown; a brother, A.J Hodgman; maternal grandparents, Roger and Sheryn Leonard and Paternal grandmother Lorraine Kallhoff all of Omaha area. Memorials can be made to: Easter Seals Camp and left or mailed to the Reichmuth Funeral Home in Elkhorn.

Jack Kallhoff, age 20 of Omaha, died at his home with his family on Tuesday, June 23, 2020. He was born the son of Cary Kallhoff and Nicole (Leonard) Brown on August 30, 1999 in Omaha. Jack was gentle, kind and loving to everyone he met.... View Obituary & Service Information

The family of Jack Ryan Kallhoff created this Life Tributes page to make it easy to share your memories.

Jack Kallhoff, age 20 of Omaha, died at his home with his family...

Send flowers to the Kallhoff family.