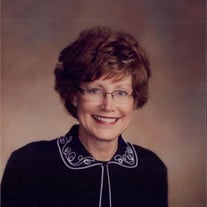 Jackie L. (Jorgensen) Andersen, daughter of Harold and Dorothy Jorgensen, was born on January 20, 1950 in York, Nebraska. She attended Exeter High School and received her Bachelors Degree from University of Nebraska - Lincoln in 1972. Growing up, Jackie was involved in 4-H and helping on the family farm. After graduating from college she began her career with Sears, working in Oklahoma, California, and Kansas from 1973 to 1977. In 1977, Jackie transferred to the Sears office in Lincoln, Nebraska where she worked through 2005. During this time, she worked as a sales associate and quickly moved into management roles, where she spent the last 25 years of her career with Sears. After retiring from managing sales departments in the retail space, Jackie began her second career working for Union Bank and Trust in their loan department, a position she held from 2005 to 2015. For a brief time, Jackie and her two sons, Chase and Wade, all worked for Union Bank and Trust; an inside joke that it was a “family business.” After moving back to Nebraska in 1977, Jackie continued her passion for snow skiing in Colorado. At an organization meeting for an upcoming ski trip, she met her future husband Bob Andersen. Bob and Jackie were married on July 10, 1982 at Southwood Lutheran Church. Shortly after, they began their family with two children, Chase and Wade. During this time, Bob and Jackie were busy working full time, raising their children, and managing the activity schedules of their sons. She remained active in DECA, acting as a state judge for high school students in the areas of fashion merchandising and presentation. Working in coordination with the University of Nebraska, she assisted in the development of an internship program for students in the area of fashion merchandising. Jackie remained passionate about photography, taking numerous courses to improve her skills and enjoyed taking pictures of Nebraska statewide cooperative owned grain elevators and facilities (a multi-decade, surprise project which she presented to her husband upon his retirement from the Nebraska Coop Council) and pictures of her family. Additionally, Jackie remained active within Southwood Lutheran Church and was always willing to help her sons as they built their own homes. Always hardworking, she was never afraid to roll up her sleeves and help them decorate their homes, plant flowers around their houses, and even strip and re-stain a deck. Jackie enjoyed spending time with her family. From attending Nebraska football games with Bob, to organizing family vacations, to baking with her granddaughter, she was the cornerstone of her family. Jackie passed away on January 20, 2022, on her 72nd birthday. She was preceded in death by her parents Harold and Dorothy Jorgensen, parents-in-law Ed and Darlene Andersen, and brothers-in-law Joe Splichal and Jack Eberspacher. She is survived by husband Robert Andersen, sons Chase Andersen and fiancée Melissa Pitts, and Wade Andersen, sisters Jerrie Splichal and Jinger Eberspacher, in-laws Peggy and Kent Merryweather, Nancy and John Prestia, and Susan and Terry Gilfry, and granddaughter Eleanor Mueller. The family would like to say “Thank You” for your support, prayers, and friendship.

The family of Jackie Lee Andersen created this Life Tributes page to make it easy to share your memories.

Send flowers to the Andersen family.