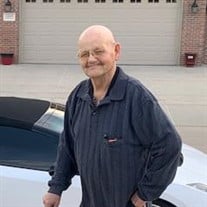 Jackie (Jack) Donald Collins was born August 18, 1938 to Fearne and Bernice (Bunny) Collins in Imperial, NE. He graduated from Chase County High School in 1958 and joined the Army shortly after. He was a communications specialist in the US Army Security Force where he served in Paris and West Berlin when the Berlin wall was constructed by occupying Russia in August of 1961. After his discharge he returned home where he worked as a butcher in the family grocery store. In 1963 he was married to Janice Thompson and to this union Kirk William and Rhonda Bernice were born. Jack enjoyed fast cars, with his prize possession being a 1966 Ford Mustang. He attended barber school in Omaha, NE, and this became his life long career. He enjoyed talking with people and telling jokes. Jack was a happy go lucky man and was a joy to know. In 1982 he met and married Joann Ebers-Hapke of Omaha, NE a union that would last 38 years. Over that period of time, Jack continued his barbering career until the very end. A career spanning over 50 years. His work ethic was second to none as he developed a sizable group of clients with which he had relationships that he lived to nurture every day. His sense of humor he wore on his sleeve. Rarely would you be in his presence and not hear a joke. One of Jack’s most defining characteristics was the love he had for his family and spending time with them. When health permitted he thoroughly enjoyed going to the grandkids’ activities. Jack departed this life on August 6, 2020 just shy of his 82nd birthday. He is preceded in death by his parents, Fearne and Bernice Collins, his sister and brother in law, Connie and Byron Bremer of Imperial, his brother and sister in law, Chuck and Toni Collins of Big Fork, MT, his son, Kirk Collins of Palisade, NE and his son in law, Tom Wolfe of Climax Springs, MO. He is survived by his wife Joann, daughter Rhonda Wolfe, step sons, Brian (Melissa) Hapke of Fremont, NE and Scott Hapke of Shawnee, KS and five grandchildren: Thomas John Wolfe, Camille Wolfe, Bryanna Hapke, Carlee Hapke and Gabriel Hapke. He will be dearly missed by all. The family has chosen to have a private family service at the Reichmuth Funeral Home.

Jackie (Jack) Donald Collins was born August 18, 1938 to Fearne and Bernice (Bunny) Collins in Imperial, NE. He graduated from Chase County High School in 1958 and joined the Army shortly after. He was a communications specialist in the US Army... View Obituary & Service Information

The family of Jackie "Jack" Collins created this Life Tributes page to make it easy to share your memories.

Send flowers to the Collins family.