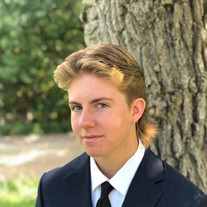 In Lieu of flowers, memorials may be made to the Jacob Ferguson Memorial Fund at Relevant Church. For donations to Relevant Church may use the following link: https://pushpay.com/g/relevantcommunity?src=hpp&r=monthly Jacob Patrick Ferguson was born on July 31, 2001 in Omaha, Nebraska to Frank and Sherrill (Bell) Ferguson. He grew up in Omaha where he attended Manchester and West Dodge Elementary, Grandview Middle School, and Elkhorn High School. As a young boy, Jacob enjoyed building anything and everything with Legos. He loved riding on his scooter and driving his Big Foot Power Wheel where he would take his sister for a ride and do 360s, basically he enjoyed anything that he could make go fast. He loved camping at Lewis and Clark Lake where he could enjoy the wave runners and occasionally get pulled over by the Po Po. He loved family vacations, especially their trips to Mexico and Disney World.. Jacob was an incredible athlete who started playing hockey at a very young age. He excelled at it as he got older and played for the Omaha AAA hockey and Omaha Jr. Lancer organizations. His passion for athletics wasn't limited to just hockey so he scaled back on hockey so that he could be involved in his high school sports like tennis and golf, which he learned by watching YouTube. Becoming a certified SCUBA diver and diving with his family was starting to become a big passion for Jacob. This summer he picked up a new hobby and was learning new tricks wakeboarding. As he got older he kept his passion to go fast. He loved driving his WRX and his dad's Camaro any chance he got. Jacob was funny, athletic, loving and loyal with a charismatic personality. He enjoyed playing his guitar, which he also learned on YouTube, and listening to music like the Red Hot Chili Peppers and Afternoon Delight by the Anchormen. He loved family time where we would watch classic movies and binge watch TV series. Jacob loved his two new dogs; he trained them on his own and cuddled with them every night. Jacob enjoyed anything being grilled from dad's grill along with Duncan donuts, Cane's, and mom's cookies. He loved a good steak and seafood was a bonus. Red Lobster was one of his favorite restaurants, he loved to go there for lunch with his dad and grandma every summer. Jacob passed away on August 31, 2019 at his home in Omaha at the age of 18 years and one month. He was preceded in death by his grandfather Norman Bell and his faithful dog, Maggie, who were both waiting for him in heaven. Jacob is survived by his parents Frank and Sherrill Ferguson; Sisters Brynn and Grace both of Omaha; grandparents Patrick and Elaine Ferguson of Palmetto, FL and Barbara Bell of Iowa City, IA; uncles and aunts Patrick and Liz Ferguson of Sanford, FL; John and Christy Ferguson of Omaha; Thomas and Michelle Anderson of Bennington: and Ricky and Kerri Bell of Gregory, MI; and many cousins;

In Lieu of flowers, memorials may be made to the Jacob Ferguson Memorial Fund at Relevant Church. For donations to Relevant Church may use the following link: https://pushpay.com/g/relevantcommunity?src=hpp&r=monthly Jacob Patrick Ferguson... View Obituary & Service Information

The family of Jacob Patrick Ferguson created this Life Tributes page to make it easy to share your memories.

In Lieu of flowers, memorials may be made to the Jacob Ferguson...

Send flowers to the Ferguson family.