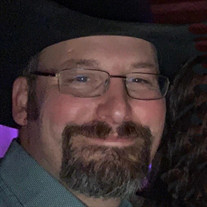 In Lieu of flowers, Memorials to the family for later designation All Covid-19 related restrictions for funerals and indoor gatherings will be enforced. This may cause delays or restricted admittance. Live Stream at https://webcasts.lifetributes.com/1100761 Jacob Ryan Richards was born on November 12, 1980 in Papillion, Nebraska to Willis, Jr. and Sheila (Krauth) Richards. He grew up in LaVista and Bennington, graduating from Bennington High School in 1999. As a young boy, Jake was active in football, wrestling and baseball. He enjoyed hunting and fishing and he loved taking things apart and putting them back together. Jake always said movie quotes, and he is famous for his one-liners. After high school Jake attended automotive Air Conditioning school in Des Moines. Jake married Ann Bennett on October 2, 2002 in Blair, Nebraska and after 12 years living in Uehling, Nebraska, they moved their family of Jon, Kelly, Meghan and Jacob, Jr. to Ithaca, Nebraska. Jake has worked as a mechanic at several businesses in Omaha before transitioning into the fire safety industry as a sprinkler fitter, most recently working at Continental Fire. He was a dedicated “Ford” man, enjoyed Stock Car racing, bull riding, gardening, collecting, barbecuing and performing in community theatre. Jake was a member of the Ithaca Fire Department and Alma Lutheran Church, a Mason and Shriner and was active in coaching his children’s sports. He was hard-working, reliable, honest, loving and tough. Jake was an avid Miami Dolphin fan and savored a good steak, a cold Busch Light and dinner out at Romeo’s. Jake passed away on November 8, 2020 at his home in Ithaca, Nebraska at the age of 39 years, 11 months and 28 days. He was preceded in death by his mother Sheila, grandfather Willis, Sr., Cousin Shane Richards, mother-in-law Diane Robinson Bennett and special friend Kelly Taylor. Jake is survived by wife Ann; Children Jon Richards of Lincoln, Kelly Richards, Meghan Richards and Jacob Richards, Jr all of Ithaca; Father Willis Richards, Jr. of Valley; brother Brandon (Mandy) Richards of Yutan; Sister Traci Happel of Council Bluffs; Grandmother Millie Richards of Valley; many loving cousins, nieces, nephews, aunts, uncles and “brothers”.

In Lieu of flowers, Memorials to the family for later designation All Covid-19 related restrictions for funerals and indoor gatherings will be enforced. This may cause delays or restricted admittance. Live Stream at https://webcasts.lifetributes.com/1100761... View Obituary & Service Information

The family of Jacob Ryan Richards Sr created this Life Tributes page to make it easy to share your memories.

In Lieu of flowers, Memorials to the family for later designation
All...

Send flowers to the Richards family.