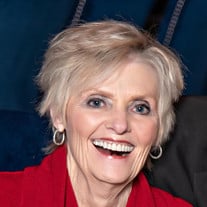 Memorials to ALS of the Heartland or Jacqueline and David Jacox Family Scholarship fund at UNK Jacqueline Kay Jacox was born on April 19, 1949 in Grand Island, Nebraska to Paul and Minnie (Perdew) Quisenberry. She grew up on a farm near Wood River where she attended grade school and graduated from Wood River High School in 1967. As a young girl, Jacque was active in all aspects of farm life including cooking, sewing and 4-H. She was a cheerleader, a great student and an a dedicated participant in Jobe’s Daughters. Following high school, Jacque studied educatiuon receiving her Bachelor’s Degree from "Kearney State" and a Master’s Degree from Doane College. Jacque married David Jacox on December 20, 1969 at the Methodist Church in Grand Island, Nebraska. Dave and Jacque were 20 years old when they said "I do" and have been madly in love ever since. These two crazy kids were known as "night owls", always on the move going out with friends and enjoying life. After a few years, they were blessed with two daughters Stephanie and Paula and boisterious little boy, Matt, a few years later. During this time, they moved from Beatrice to Kearney which would become their home for many happy, years. When professional needs required relocating, Dave and Jacque moved to Omaha, Nebraska for the remainder of their married life. As a couple, these two are a perfect example of love, partnership, committment and support. As a teacher, Jacque began her career in the little town of Niobrara, then Beatrice, then Kearney, retiring as the head of the Family and Consumer Sciences Department at Millard West. Jacque was a wonderful teacher with endless patience and "lots of second chances" givng every student the opportuity to complete his or her work even if it was a little overdue. This same patience and compassion was even more prevelant watching Jacque as a mother. Jacque treasured time with her family driving kids to endless activities, sewing them beautiful clothes and blankets, going to the pool and maybe the most memorable, spending time at Johnson lake. In fact, it is quite possbile... that she's still a little irritated with Dave for selling the place. :) Jacque loved golfing at Oak Hills Country Club with her friends, playing bridge, cheering on the Huskers, shopping, decorating the house and is known for selecting the most perfect gifts for those she loved. Jacque's legacy is the insurmountable love she shared as wife, mother, grandmother, sister and friend. Jacque passed away on Thursday, October 15, 2020 at her home in Omaha, Nebraska at the age of 71 years, 5 months and 26 days. She was preceded in death by her mother Minnie. Jacque is survived by her husband David. Children Stephanie Vondrak of Omaha, Paula (Roy) Patrick of Vienna, Virginia and Matt (Leslie) Jacox of Waterloo, Nebraska. 7 and soon to be 8 grandchildren with another sweet little boy quickkly on his way. Father Paul Quisenberry of Wood River, Nebraska. Sister Janet (Sherm) Carr of Gibbon, Nebraska. Brother Gary (Ida) Quisenberry of Wood River, Nebraska.

Memorials to ALS of the Heartland or Jacqueline and David Jacox Family Scholarship fund at UNK Jacqueline Kay Jacox was born on April 19, 1949 in Grand Island, Nebraska to Paul and Minnie (Perdew) Quisenberry. She grew up on a farm near Wood... View Obituary & Service Information

The family of Jacque Kay Jacox created this Life Tributes page to make it easy to share your memories.

Memorials to ALS of the Heartland or Jacqueline and David Jacox...

Send flowers to the Jacox family.