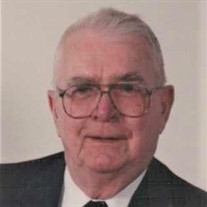 Memorials to VFW #9844, Yutan Fire Dept or St. Peter's Church of Christ James William Anderson was born on September 19, 1929 in Holdrege, Nebraska to Arthur and Charlotte (Spiedel) Anderson. He grew up in Holdrege where he attended grade school and graduated from Holdrege High School in 1947 as a proud Duster. Jim went on to attend college and work as a carpenter before enlisting in the United States Army in 1951. He served his country until February of 1953 including 11 months of overseas duty with the 74th Engineer Combat Battalion. After his hitch in the service, Jim returned to college to receive his degree in Business. As a young boy, Jim was a good swimmer and loved his Boston Terrier “Muggins” but his life-long passion would be baseball. Jim married Virginia Peters on December 17, 1955 in Lincoln, Nebraska and they were blessed with two children: Carole and Steven. Jim and Virginia began their family in Crawfordsville, Indiana before moving to Yutan, Nebraska in 1962. After Virginia passed away in 1968, Jim became a single parent, raising both kids thru high school, always making time for their activities. Jim married Thelma Wilson Norton on September 27, 1980 in Lincoln, Nebraska. They continued their lives in Yutan as a married couple for the next 39 years. Jim worked for RR Donnelly Company in Chicago before going to work at the Bank of Yutan, rising to the office of President before his retirement in 1990. He was an avid St. Louis Cardinal fan and a Husker football season ticket holder for decades. Jim was fond of crossword puzzles and jigsaw puzzles and was a lifelong student of the Korean War. As a proud Swede, his interest in genealogy took him on several trips to learn more about his heritage. He was modest, honest, civic minded and a man of great integrity. Jim was active as the Town Clerk, a volunteer fireman and served as the church treasurer for over 20 years. He was a life long member of VFW Post 9844 and American Legion Post 262. He was a founding member of KWVA Chapter 1. He was especially proud of his part in the creation of the Korean War Display at the SAC Museum. After he retired, he became even more involved in his various activities, often commenting that he got more time off when he worked full time. Jim enjoyed a hamburger fresh off the grill, a cold glass of milk and dinner out at Farmer Brown’s with his family. Jim passed away on Wednesday, October 2, 2019 at Life Care Center of Elkhorn, Nebraska at the age of 90 years and 13 days. He was preceded in death by his parents Arthur and Lottie, wife Virginia, grandson Todd Newbern and sister Rosemary Waters. Jim is survived by his wife Thelma; children Carole Anderson of Yutan; Steven and Terri Anderson of Lincoln; Steve Norton of Rochester, MN and Vicki and Mark Hunzeker of Pittsburgh, PA; grandchildren Marc Newbern, Andrew Anderson, Megan Anderson, Christian Norton, Andrew Cody Norton, Katherine Norton, Kelsey Norton, Jacob Hunzeker and Megan Hunzeker; great grandchildren Adelia Paige Newbern, Zoe Norton and Henry Norton;

Memorials to VFW #9844, Yutan Fire Dept or St. Peter's Church of Christ James William Anderson was born on September 19, 1929 in Holdrege, Nebraska to Arthur and Charlotte (Spiedel) Anderson. He grew up in Holdrege where he attended grade... View Obituary & Service Information

The family of James William Anderson created this Life Tributes page to make it easy to share your memories.

Send flowers to the Anderson family.