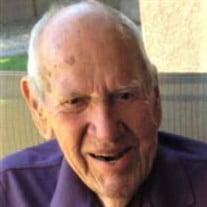 Jim Johnson was born on April 2, 1932 in Alliance, Nebraska to Bernice (Mitera) and Henry Johnson. He was the oldest of three children and the only son. Initially, the family lived in Bridgeport, Nebraska, but after moving to Omaha he attended Holy Name School where he played football and basketball. After high school, Jim enlisted in the U.S. Navy during the Korean War. He was trained as a helicopter mechanic and served aboard the USS Intrepid aircraft carrier throughout the Caribbean. While Jim was stationed at Pensacola Naval Air Station, Florida, he met his future wife, Kitty (Catherine) Goff, of Mobile, Alabama. After their wedding in 1956, the couple moved to Omaha where Jim started and successfully operated an appliance repair business for over 50 years. They raised four children spending the first 20 years in Omaha before moving to Yutan, Nebraska in 1976 living in a custom home built by Jim. He was mechanically inclined and a self-taught craftsman. He was able to visualize solutions and solve problems while building the family home. Jim had many interests throughout his long life including playing pool, ping pong, bowling, playing softball on the St Richards men’s team and playing card games, especially cribbage. He enjoyed fishing, hunting, and camping, starting out in a tent, followed by a 5th wheel trailer, and ending up in a 40ft RV motor home. His biggest passion throughout his adult life was watching college and pro football games. He was an avid Cornhusker football fan, and his passion was intensified by Kitty’s equal devotion to the Alabama Crimson Tide football team. Every August he was optimistic that the Huskers would have another championship season. In his later years, Jim was an avid reader; his favorite genres were westerns, mysteries and espionage novels. He spent the last 14 years solving many Sudoku puzzles, even mastering the very difficult multi-boxed ones. Jim enjoyed traveling throughout the United States, Mexico, and the Caribbean before buying his RV. After Kitty passed away in 2008, Jim became a snowbird, spending his winters in Mesa, AZ in the RV driving ALL the back roads during his annual migrations in the fall and spring. He enjoyed many historical and geographical places that each state had to offer along the way. Jim was quite the foodie, dining at many fine eateries in Omaha and Mesa. He enjoyed exploring new restaurants as well as returning to his favorites during his migrations. He will be missed by many waitresses throughout the country. Jim was proud of the accomplishments of his children, grandchildren and great grandchildren who affectionately called him Papa. His family included children: Cathy (Richard) Johnson-Reynolds of Fort Collins, CO; Jim (Sherry) Johnson of Elkhorn, NE; Dan Johnson of Omaha, NE; and Carol (Jay) Wingler of Elkhorn, NE; 8 grandchildren, 9 great-grandchildren, and sisters: +Henrietta Bendel and Mary Charlene (Ben) Peiffer. Jim passed away peacefully on Christmas morning 2021 at the age of 89 years 8 months and 23 days.

Jim Johnson was born on April 2, 1932 in Alliance, Nebraska to Bernice (Mitera) and Henry Johnson. He was the oldest of three children and the only son. Initially, the family lived in Bridgeport, Nebraska, but after moving to Omaha he attended... View Obituary & Service Information

The family of James Henry Johnson created this Life Tributes page to make it easy to share your memories.