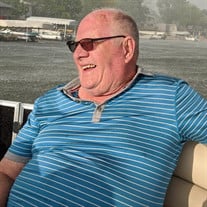 James Patrick O’Connor of Valley, Nebraska was born February 15, 1940 in Creston, Iowa to Richard and Dorothy O’Connor. He died January 29, 2021 at the Josie Harper Hospice House in Omaha. He was the oldest of four and was raised in Oskaloosa, Des Moines, and Sioux City, from where he graduated High School. He went on to obtain his college degree from Creighton University in Omaha. He joined the Navy after college and served on the USS George McKenzie as a radar/communications specialist. His adventures in the Navy ranged far and wide across the Western Pacific Ocean and he eventually returned home with a collection of great stories from his Navy years. He met his beautiful wife Jacqueline (Alesch) while in Omaha and they married in 1967. They were eventually blessed with three children: Patty (Felix Davidson) O’Connor, Christy (Todd) Bargstadt, Mike (Denise) O’Connor and six grandsons. Jim was a banker much of his life and then became a business owner until retirement. Upon retirement, he sold the business to his son and until his death, he enjoyed helping run the place from time to time. Jim was a pillar of his community. He was on countless boards, booster clubs, neighborhood committees, associations, town projects and church committees. He could always be found on the bleachers at his kid’s activities and games throughout their lives. Once the grandsons started their activities, he attended all of those too. He had so many friends. To know Jim was to love him. He traveled extensively with his wife, his friends, his children and his grandchildren. He loved his home on Ginger Cove and we estimate that he taught about one million people to water ski with his endless patience and skilled boat driving. He was always ready for a pontoon ride (twice around the lake) where he would regale his guests with Miller Lite and interesting stories about his favorite place. Jim was also a skilled woodworker and loved a good project. If you could dream it up, Jim could execute it. His garage shelf-making skills and cornhole boards are legendary. Jim will be remembered as a wonderful, funny man with a special gift for making everyone feel like family the instant he met them. He had a deep unwavering faith in God. Jim is survived by his wife Jacquie, his children, his grandsons: Taylor (MacKenzie) Bargstadt, Jesse (Katie) Bargstadt. Charlie Bargstadt, William (Jenny Gray) Davidson, Jacob O’Connor, and Lucas O’Connor. He is survived by his brothers, Jack (Kathy) O’Connor, and Tom (Karen) O’Connor. He was blessed with 6 bonus siblings from Jacquie’s side of the family: Betty (Dennis), Marlene (Paul), Kenneth (Marietta), Paul (Jane), Kay (Bob), Claudia (Steve). He always felt so blessed to have them all as family. He had numerous nieces and nephews who will remember him for his Donald Duck voice and his loud chortling laugh. He is preceded in death by his parents, his sister Eileen O’Connor, and his granddaughter Molly Bargstadt. His remains will be buried with full Military Honors at the Omaha National Cemetery. Please direct donations to the Josie Harper Hospice House in Omaha or the Visiting Nurses Association.

James Patrick O&#8217;Connor of Valley, Nebraska was born February 15, 1940 in Creston, Iowa to Richard and Dorothy O&#8217;Connor. He died January 29, 2021 at the Josie Harper Hospice House in Omaha. He was the oldest of four and was raised... View Obituary & Service Information

The family of James Patrick O'Connor created this Life Tributes page to make it easy to share your memories.

Send flowers to the O'Connor family.