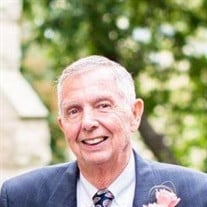 Memorials to the American Heart Association James Norton Redberg (Jim) was born October 20, 1937 in Minneapolis, Minnesota to parents Roy and Mildred Redberg. Jim married Jean Sylvia Schmit, June 6, 1959 at St. Bridget of Sweden Catholic Church in Lindstrom, Minnesota, and were blessed with five children: Lisa, Laura, John, Mary and Christine. Jim’s career brought the family to many states before they finally settled in Elkhorn, Nebraska in 1977. His first job was at Charlie’s Café Exceptionale. He started as a dishwasher and was promoted to the dessert station where he learned to cook Flaming Baked Alaska, Chocolate Eclair, Flaming Cherries Jubilee and more, including personalized birthday cakes. One month later, he moved to the sandwich station then to broiler man’s assistant where he prepped fresh lobster, lobster tails and steaks. He was promoted again to a vegetable cook making Corn O’Brien, Asparagus Almondine, Broccoli with Hollandaise Sauce and eventually moved up to the Fry Cook. As a Fry Cook, he made Chicken Kiev over wild rice, French Fries, Baby Frog Legs, Jumbo Frog Legs, Scallops, Jumbo Shrimp, Smoked Oysters, Prime Rib and Filet Mignon. One day he was working, and a waitress came back to the kitchen and said, “Jimmy, I have a $5.00 tip for you. Nat King Cole was in and he loved your Baby Frog Legs sautéed in garlic butter.” Jean worked in the office at Charlie’s where they eventually met at the company Christmas Party and fell in love. Jim and Jean married and moved to Cheyenne, Wyoming where Jean was to work on the Atlas Missile site. With the move, Jim had to find other means of employment and gave up his passion for cooking. He was then hired at J.J. Newberry’s (an American five and dime store chain) located in Wyoming, Missouri, Ohio, North Dakota, Colorado, and Nebraska. He started as a stock boy and climbed the ladder to Assistant Manager in South Dakota, Montana and Grand Junction, Colorado. He was then promoted to a General Manager in Denver, Colorado but left for the opportunity to work for a new store called Gibson’s Discount Center, where he managed and opened two locations in La Junta, Colorado and McCook, Nebraska. Later, he was offered a job to work with Laughlin Group and became a Salesman for the Midwest. He was then promoted to a Regional Manager for McCook & North Platte, Nebraska and Mobridge, South Dakota. Eventually, he would be offered a position with Pamida as a Purchasing Buyer where he would retire at the age of 56 on July 17, 1993. Jim would always tell his five children, “If you have a strong work ethic and positive attitude, you can succeed at anything.” Jim loved to travel to destinations including Austria, China, Germany, Hong Kong, Ireland, Italy, Japan, Mexico, Netherlands, Philippines, South Korea, Taiwan, Thailand and Yugoslavia. He was very devoted to his family and enjoyed attending his grandchildren’s school and sporting events. He enjoyed watching Nebraska football, major league baseball, Nebraska women’s volleyball, walking two to three miles on the track with his friends at the gym, playing bridge, fishing, bowling, horseshoes, corn hole, chair volleyball, pickle ball and working out in his yard. He was very proud of his backyard and every time a repairman would come to the house; Jim insisted for them to come to the deck to see its’ unmatched view of Elkhorn. After his wife Jean died in 2013, he continued to plant her favorite flowers every spring. When the flowers would bloom, he would make sure that Jean had a fresh bouquet at her gravesite and enjoyed delivering flowers to his bridge club, his daughters place of business and to the Common Ground for all to enjoy. He also grew lemons, rhubarb and tomatoes that he enjoyed handing out to his friends. Today we honor, respect and remember a good man who touched and enriched all our lives in so many ways. Jim will be deeply missed. Quote: “Life is not measured by the number of breaths that you take, but by the moments that take your breath away.” Bible Verse: Psalm 23:4 reads, “Yea, though I walk through the valley of the shadow of death, I will fear no evil: for thou art with me; thy rod and thy staff they comfort me.” Jim went to be with his Lord and Savior Jesus Christ on February 26, 2021, surrounded and supported by his loving family by his side at Bergan Mercy Hospital, Omaha, Nebraska, at the age of 83. Jim was preceded in death by his parents Roy and Mildred (Hegre) Redberg, wife Jean Redberg, brother Richard Redberg and grandson Robert Plambeck. Jim is survived by his children and their spouses: Lisa Plambeck of Omaha; Laura Rohwer of Elkhorn; John and Katja Redberg of Nuremberg, Germany; Mary and Michael Moore of Camas, Washington; Christine and Wade Behlen of Elkhorn; grandchildren: Michael Rohwer, Jarrod Rohwer, Stephen Redberg, Jordan Rohwer, Justin Rohwer, Kira Redberg, Danielle Plambeck, Weston Behlen, Lauren Redberg, Michael Moore, Jr., Wyatt Behlen and Joel Redberg, many great grandchildren, nieces and nephews. Jim is also survived by brothers: Jerry Redberg of Ceres, California, Al Redberg of Maple Grove, Minnesota, and sisters Louise Schwab of Ham Lake, Minnesota, Beverly Carlson of Savage, Minnesota and Paulette Belden of Coon Rapids, Minnesota.

The family of James Norton Redberg created this Life Tributes page to make it easy to share your memories.

Memorials to the American Heart Association

Send flowers to the Redberg family.