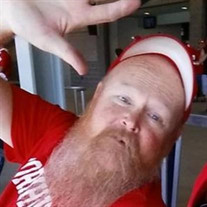 In Lieu of flowers, memorials may be made to the family for later designation. James Dean Sake, Sr. was born on June 1, 1956 in Grand Island, Nebraska to Donald and Shirley (Williamson) Sake. He grew up in the Elkhorn/Valley area and attended grade school at Mercer and Waterloo before graduating from Waterloo High School in 1974. Jim went on to attend the University of Nebraska-Omaha for one year. As a young boy, Jim enjoyed life on the farm, especially raising calves. He enjoyed hunting, fishing and camping but baseball was his passion. Jim loved to read and was active in Drama Club at school. Jim married Susan Andersen on March 13, 1982 in Las Vegas, Nevada and they were blessed with two sons: Andrew and Jim, Jr. Jim and Susan have made their home in Valley. Jim has always been a hard worker, from an early age he operated his own “pick up” service, worked at Doud’s and Farmer Brown’s before going to Valmont, where he worked until his disability forced him to retire. He was a strong advocate for the community, serving on the Park Board, Valley Youth Organization and as a Boy Scout Leader. Jim was a dedicated member of Masonic Lodge #310 A.F. & A. M. Jim’s passion remained with baseball as he served in administrative positions in both Little League and American Legion baseball leagues for the Valley teams. One of his favorite activities was grocery shopping, especially “sample day” at Whole Foods. Through the years, Jim remained a humble volunteer with deep religious and family devotion. He was not one to sit around and he did not allow his disability to deter him in any way. Jim was an avid Cubs and Husker fan and savored a delicious filet from Farmer Brown’s. Jim passed away on Thursday, September 19, 2019 at Methodist Hospital in Omaha, Nebraska at the age of 63 years, 3 months and 18 days. He was preceded in death by his parents Donald and Shirley. Jim is survived by his wife Susan; sons Andrew (Rachel Jones) of Omaha and Jim, Jr (Anna) of Palmer, NE; 2 grandchildren; brothers Robert of Fremont, NE and Charlie (Helen) of Malmo, NE; sister Donna Sake of Omaha, NE

In Lieu of flowers, memorials may be made to the family for later designation. James Dean Sake, Sr. was born on June 1, 1956 in Grand Island, Nebraska to Donald and Shirley (Williamson) Sake. He grew up in the Elkhorn/Valley area and attended... View Obituary & Service Information

The family of James "Jim" Sake Sr. created this Life Tributes page to make it easy to share your memories.

In Lieu of flowers, memorials may be made to the family for later...

Send flowers to the Sake family.