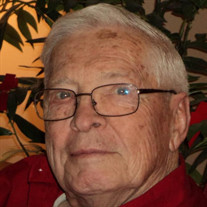 Memorials to the family for later designation. James Levi Salmans was born on October 13, 1935, in Larned, Kansas. He never liked the Levi name and has always gone by “James Lee” or “Jimmy Lee” by his mother when he was in trouble. His parents were Lawrence and Mary Zecha Salmans of rural Belpre, Kansas. He grew up on the family farm. He attended the rural Zook High School where he and his brothers played all sports. The boys all worked on the farm growing up. They also helped the neighbor farmers to earn extra money for college. Lee attended St. Mary’s of the Plains College in Dodge City, Kansas. Lee played football – the school was so small that everyone played. Lee played center. Lee was president of his class, on the Student Council, and always on the honor roll. He was active serving at mass. Lee graduated Magna Cum Lade in May 1957. Growing up Lee was always close to his 3 sisters and two brothers. He looked out for them with unconditional love. Lee met Joyce when he was a freshman in college, but he didn’t see her again until he was starting his senior year of college. Joyce was starting her senior year in high school. They wrote lots of letters and went to the movies on Sunday evening. He would then go to the farm, get up early, and go back the 60 miles from Larned to school in Dodge City. He worked nights in a downtown café and would run the mile or two back to the dorm after they closed at 10:30 P.M. Lee graduated from college one night and Joyce graduated from high school the next night. It wasn’t long and Lee gave Joyce an engagement ring. They were married on September 3, 1957, at Sacred Heart Catholic Church in Larned, Kansas. Sometime around the first of the year, Lee accepted a job in Manhattan, Kansas with MetLife Insurance. About that time, they found out their first child, Mark, was on the way. Lee was a wonderful Dad. He wanted a big family and soon Jim was born – then Mary, then Lorrie, then Shelly, then John, and finally Angie. Wow 7 kids. Lee worked long hard hours. He found several jobs during the years. He worked retail credit for Robinson COOP in Robinson, Kansas, and for Hesston Corporation in Hesston, Kansas. Lee always thought it was important to give back to your church and your community. As for church, he taught Catechism class, served on the Finance Committee, and he and Joyce worked Bingo in the church for 22 years. He also worked at the welcome desk for the school. Lee was in Lions Club for many years. He helped kids, whose family couldn’t afford eye glasses, get them and get scholarships for college. He also worked on the clean-up of the highway between Elkhorn and Waterloo. Lee thought education was very important. When the kids were all in school, he started back to school at Wichita State to get his Master’s Degree. Lee accepted a job at Valmont Industries in December 1973. He also transferred to UNO and finally obtained his Master’s Degree in Finance. Lee started at the credit department at Valmont. He worked in insurance and served as Vice President and Secretary for the Board of Directors. He travelled the world but was always glad to be back to the USA and with his family. Lee loved his 7 kids, 18 grandkids, and 13 great grandkids. He was always interested in what they were doing and encouraged them to work hard to get it. This poem’s unknown author measures Lee up pretty well – A Good Man – Is one whose warmth, and humor have earned him respect of his friends and family…someone who makes this world a better place in which to live.

The family of James Lee Salmans created this Life Tributes page to make it easy to share your memories.

Memorials to the family for later designation.

Send flowers to the Salmans family.