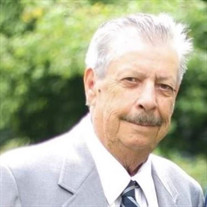 Jan Sanford Shaw was born September 5, 1943 in Orchard, Nebraska to Gene and Delores (Sanford) Shaw. Jan grew up in Ericson, Nebraska. He attended Ericson High School where he played basketball and ran track, and graduated in 1961. Jan married Jeannette Berube on September 10, 1961. They became the proud parents of Kelly, Kathy, and Dena. Jan was a proud member of the Ralston Volunteer Fire Department & Honor Guard where he met many of his close friends. He worked for AT&T for over 35 years, but his most rewarding role was being a grandfather. He loved to brag to everyone about how proud he was of his grandkids. Jan attended as many of their sporting events whenever he could. When he wasn’t watching or talking about sports, Jan enjoyed spending time in Ericson, hunting, fishing with his grandkids, and capturing photos of nature and various family events. Jan liked to listen to country music and sip on an Old Milwaukee Light Beer with the boys at the bar. He had an intense hatred of onions and just as intense love for ice cream and sports, especially Husker football. Jan would “work” from his computer when in reality he played Free Cell. His family will miss many things about Jan, especially preparing his favorite Christmas Eve dinner: oyster stew. Jan, age 77 of Elkhorn, NE died on Wednesday, September 1, 2021 at home surrounded by family. He was preceded in death by his parents, Gene Shaw and Delores Sanford Shaw. Jan is survived by his wife, Jeannette Shaw; daughters, Kelly Shaw Ecabert, Kathy Shaw DeWitt, Dena (Noran) Knobbe; grandchildren, Jon (Angela) Ecabert, Jaclyn (Tony) Arrick, Emily (Pete) Brichacek, Cody (Donna) DeWitt, Kaitlyn Knobbe, Elle Knobbe, Drew Knobbe; great grandchildren, Allie Sorensen, Kennedy DeWitt, Eva Arrick, Jameson DeWitt, Pennie Brichacek, Leo DeWitt, Archer Ecabert; and brother, Gene (Irene) Shaw. Memorial service will be held at 6 pm, Thursday, September 9, 2021 at Reichmuth Funeral Home in Elkhorn with visitation with the family beginning at 4 pm.

The family of Jan Sanford Shaw created this Life Tributes page to make it easy to share your memories.

Send flowers to the Shaw family.