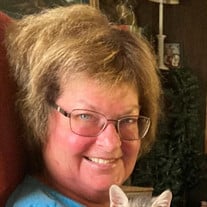 Janet Marie (Young) Luedtke was born April 29, 1955 in Council Bluffs, Iowa to Eugene and Bernice (Eckrich) Young. Janet grew up in Council Bluffs where she attended Franklin grade school, and went on to graduate from Lewis Central High School in 1973. Janet then earned her Bachelors of Science degree in Nursing from Morningside College in Sioux City, Iowa in 1977. She then achieved her Master’s degree from Central Michigan University. Growing up, Janet was active in Girl Scouts, had a love for music and all things Disney, and spent countless hours playing with her many cousins. Janet served her country in the United States Air Force from September 1983 until her honorable discharge in April 1995. She achieved the rank of Captain, and served as a clinical nurse. Janet was awarded the Air Force Commendation Medal and the National Defense Service Medal for her service during Operation Desert Storm. Janet married Tom Luedtke on May 7, 1994 at the Offutt Air Force Base Capehart Chapel in Bellevue, Nebraska. The couple was blessed with one son, Connor. They made their home in Millard from 1994 until 1998, when they moved to Elkhorn. Janet was proud of her career as an Air Force nurse, but she left the Air Force and nursing after Connor’s birth. She then worked as the financial assistant at Bethany Lutheran Church since 2002. In addition to her work at church, Janet stayed involved with the Elkhorn Library Foundation, her Bible Study Fellowship, of which she was the treasurer, Book Club, and Quilters. She was an avid reader, and enjoyed quilting and needlepoint, and somehow still found time to coach Connor’s Destination Imagination teams and attend musical performances by Connor and Jamie. Janet will be remembered as a generous, compassionate, dedicated, loyal and patriotic woman. She cherished Disney family vacations and time spent at Snow Mountain Ranch, first as an employee in college, then later family vacation spent there. She loved ‘70’s music and Big Band music, “Gone With the Wind”, and the Nebraska Cornhuskers. Janet was proud of her Air Force service, her marriage to Tom, Connor’s birth and his receiving his Eagle Scout Rank. Her biggest pet peeve was holey jeans in church, and she might have told you to, “take it easy”. Even though she had Scleroderma for the last five years, Janet never complained, and always kept a positive attitude. Janet passed away unexpectedly on April 6, 2022 at Nebraska Medicine in Omaha, Nebraska at the age of 66 years, 11 months, and 8 days. She was preceded in death by her parents Eugene and Bernice Young and sister Kathleen Young. Janet is survived by her husband Tom of Elkhorn, son and daughter-in-law Connor and Jamie of Omaha, stepchildren Jeremy, Tyler, and Carly Luedtke, all of Lincoln, NE and 3 step grandchildren. Funeral service 10 AM Wednesday, April 20 at Bethany Lutheran Church, Elkhorn. Visitation Tuesday (4/19) from 5-8 PM at Reichmuth Funeral Home, Elkhorn. Interment with military honors at Omaha National Cemetery. In lieu of flowers, memorials to the family.

The family of Janet Marie Luedtke created this Life Tributes page to make it easy to share your memories.

Send flowers to the Luedtke family.