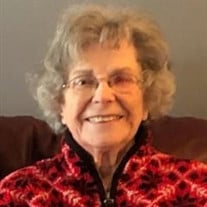 Janis Clark was born in Audubon, Iowa on January 29, 1931 to Edwin B Johnson and Margaret F Johnson (McLeran). Her family later moved to Omaha, NE where Janis attended North High School and Omaha University (now the University of Nebraska Omaha). On November 21, 1951 Janis married the love of her life, Bill Clark. They were blessed with 5 children, Christine, Stephen, Laurie, Katherine, and Kimberly. Some of Janis’s favorite activities included reading, games and puzzles, watching old movies, and listening to big band and 50’s music. She also loved dance, both watching it on television and dancing with Bill. Janis was a part of the Alpha XI Delta sorority while she was in college and she enjoyed staying up to date on the sorority and attending events when she was able. Her church, Our Saviors Baptist in Elkhorn, was very important to her and she was an active member. For over 40 years she participated in a church program where she would go across the street on Sundays to the Life Care Center of Elkhorn nursing home and play the piano for a special worship service. Janis was a loving, caring person who always took interest in the well being of others. Janis was preceded in death by her parents, husband Bill R. Clark, and great grandson Cameron Conroy. She is survived by children; Christine Clark Harrison (Lance), Stephen L. Clark, Laurie Clark Push (Edward), Katherine Clark Treu (Bodo), Kimberly Clark Hanson (Barry), 12 grandchildren, 9 great grandchildren, sister Joyce Tannahill (Jerry), sister-in-law Anita Clark Shadle, and numerous nieces, nephews and dear friends. Memorial service 7 PM Thursday with visitation from 5-7 PM all at the funeral home in Elkhorn. Memorials to Healing Kadi Foundation PO Box 8456 Omaha, NE 68108, Life Song for Orphans PO Box 9 Gridley IL 61744, or PassionLife PO Box 862223 Marietta, GA 30062.

The family of Janis Jane Clark created this Life Tributes page to make it easy to share your memories.

Send flowers to the Clark family.