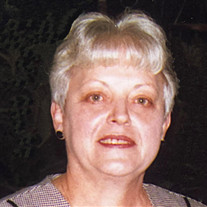 Jaris Ann Keiser was born in Omaha, Nebraska on February 5, 1940 to Edwin and Alice Thelma Keiser. She had a brother Donald, a sister Beverly and a brother Robert who died in infancy. Jaris grew up in Millard, NE attending grade school and graduating from Millard High school in 1957. It was in high school that she met the love of her life Douglas Nelson. They began dating her senior year and were married four years later on October 7, 1961 at St. Gerald’s Catholic Church in Ralston, NE. Shortly after they were married, they purchased a house in North Omaha and started a family. They became parents to three children: Lori, Steve, and David. Jaris loved being a mother and began her favorite job taking care of her family. In 1972, the family moved to Bennington, NE where they bought a house on Molley Street and deeply planted roots in the community. She was very involved in all her children’s activities, never missing a sporting event or school activity. She enjoyed sewing, painting, needlepoint and cooking (especially her famous potato salad, deviled eggs and sloppy joes). She also enjoyed a good party, a stiff drink and dancing the night away at Oft’s hall with friends and family. In 1997, her beloved husband Doug passed away and this started a new chapter in Jaris’ life. She decided it was time to get a job and started working in the elementary school cafeteria. This allowed her to do two of her favorite things, cook and be close to her grandchildren. She would often get into trouble for placing a little extra dessert on Kyle and Megan’s plates, which they loved. She really enjoyed the job and the people she worked with until she retired. The years following her retirement were spent enjoying her three grandchildren, one great grandchild, her family and numerous friends. Jaris passed away suddenly in her home on Saturday, February 1, 2020 at the age of 79 years 11 months and 27 days. She was preceded in death by her parents, husband Douglas, daughter Lori Nelson, and sister Beverly Bull. Left to cherish her memory are her sons: Steven (Beth) Nelson and David (Jill) Nelson all of Bennington; grandchildren: Kyle Nelson, Megan (Phil) Gravert and Samuel Nelson and one great grandchild, Winnie Gravert; her brother, Don Keiser of Kansas City, MO and sister-in-law, Carole Nelson of Mt. Prospect, IL; and many nieces, nephews and friends.. Memorials can be made to the family and left or mailed to the funeral home at 21901 West Maple Road – Elkhorn, 68022

Jaris Ann Keiser was born in Omaha, Nebraska on February 5, 1940 to Edwin and Alice Thelma Keiser. She had a brother Donald, a sister Beverly and a brother Robert who died in infancy. Jaris grew up in Millard, NE attending grade school... View Obituary & Service Information

The family of Jaris Nelson created this Life Tributes page to make it easy to share your memories.

Send flowers to the Nelson family.