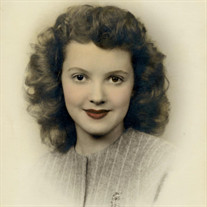 Jeanette Ann Leo was born to Norna Waters Leo and William Bradley Leo in Sioux Falls, South Dakota on July 19, 1929. Jeanette, her big sister Betty and her parents moved to Omaha, where Jeanette started kindergarten and, on the very first day, met her future husband, H. Wayne Smith. She was not favorably impressed, telling her mother "that horrible Wayne Smith jumped out of the bushes and scared me half to death!" Having told his own mother on that first day that he had met the girl he was going to marry, Wayne's courtship of Jeanette persisted until, fifteen years later, on August 27th, 1949, she married him; and thus began a 70-year adventure that included motherhood (Craig and Joleen), staunch support for Wayne as he launched and built his advertising business, travels across the country and around the world, grandparenting (Aaron, Rhea, Ryan and Jason), hosting family and friends at their private lake in LeShara, supporting her church and her community, and through it all, living her quiet, unquestioning faith in a loving God. Jeanette was a gifted student who graduated from Omaha Technical high school, and enjoyed attending class reunions with Wayne and getting together with classmates for many years. She and Wayne loved traveling with her sister, Betty, and brother-in-law, Hayden Harris, visiting them and their family (Diana, Bradley, Paulette and Mark, and their families) in California, golfing, fishing and snorkeling during their annual stays on the Kona coast in Hawaii, and dancing with the love of her life on Friday nights at the Happy Hollow Club. She was at his side when he passed away at the age of 90 on October 24, 2019. In her 92 years, Jeanette sailed on the Queen Elizabeth II, flew on the Concorde, and toured a submarine; she also read to her children every night, took each of her grandchildren to the Mall of America when they turned 15, showed kindness and devotion to her family and friends, and by her gentle example, taught us all that nothing is more important than love. Jeanette is survived by Craig Smith (Rita), Joleen Smith David (Mike), Aaron Smith, Rhea Smith Black (Adam), Ryan David (Juls), Jason David, nieces Diana (Joe) and Paulette (Craig), nephews Bradley (Rhonda) and Mark (Gina) and their families, and second cousins Steve Forbes, John Forbes (Linda), Bruce Forbes (Norma), Neil Forbes (Melody), their children and grandchildren. Visitation will be held at Reichmuth Mortuary from 4 to 7 p.m. on Thursday, March 31, with Mass of Christian Burial at St. Patrick Catholic Church in Elkhorn at 10:30 on Friday, April 1. Private interment at Calvary Cemetery. Memorials to St. Joseph's Indian School, 1301 North Main Street, Chamberlain, South Dakota 57325 or to the Omaha Veterans Administration Hospital.

The family of Jeanette Ann Smith created this Life Tributes page to make it easy to share your memories.