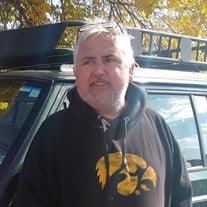 Jeffery James Gunther was born June 3, 1972 in LeMars, Iowa to James and Susan (McHugh) Gunther. Jeff grew up in LeMars, where he attended Kluchhohn Elementary school, and graduated from LeMars Community High School in 1991. Jeff was active in football, tennis, wrestling, speech, drama, and band in school. He was especially proud of his trip to play tennis in Australia with Sports For Understanding. After high school, Jeff played tennis at Coe College in Cedar Rapids, Iowa, then came home to wrestle for Westmar College. He earned his Bachelor’s degree in Economics from Bellevue University in Bellevue, Nebraska. Jeff married Tammy Backhus on November 13, 1999 in Omaha, Nebraska, and the couple was blessed with two children; Abigail Claire and Quinten James. The family made their home in Omaha. Jeff and Tammy later divorced, but remained close. Jeff worked for several years for American Title Company, and later was an account manager for Info USA. He also worked for Mr. Picnic and Event Rental. He enjoyed going fishing and hunting, and was an accomplished Cornhole (Bags) player. His favorite place to be was Okoboji. He loved the view at the lake, and he could relax just being on and near the lake. He considered it a second home. Jeff was a funny, laid back, kind, caring, and supportive man, who could also be sarcastic. He was a huge fan of the Hawkeyes and Kansas City Chiefs, and appreciated a good steak and crab leg dinner, a cold can of Busch, or hanging out at Boondocker’s. He disliked judgmental people, and could break out his groovy dance moves at any time. Jeff cherished his children more than anything, and will be most remembered for his unique, dry sense of humor, and contagious, unforgettable laugh. Jeff died unexpectedly at his apartment in Elkhorn, Nebraska on Saturday, October 30, 2021 at the age of 49 years, 4 months, and 27 days. He is preceded in death by his grandparents; Hugh and Jean McHugh, and Clair and Mary Frances Gunther. Jeff is survived by his daughter Abigail Gunther, son Quinten Gunther, and their mother, Tammy Hanke all of Elkhorn, his parents Jim and Sue Gunther of Sioux City, Iowa, sister and brother-in-law Lisa and Andrew Bach of Cedar Rapids, Iowa, 2 nephews Myles and Mason, and a niece Madison Bach, numerous aunts, uncles, and cousins, and his beloved dog, Charlie.

The family of Jeff Gunther created this Life Tributes page to make it easy to share your memories.

Send flowers to the Gunther family.