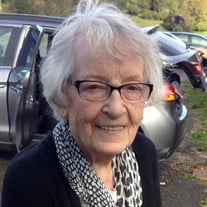 Joan was born on December 12, 1934 in Mobridge, SD to Leonard Tucker and Cora (Foer) Tucker. She grew up in Mobridge and attended Mobridge High School where she played the saxophone in the school band, was on the debate team, and was in the Girl’s Glee Club. Joan graduated in 1952; she was very proud the day of her high school graduation, as not everyone in her family had finished high school. After high school, Joan was ready to explore a bigger city and settled on Omaha, NE. This is where she met the love of her life, Ray Musselman and the two were later married in Iowa. Their union was blessed with four children, Randy, Marty, Mary Jo, and George. The first 10 years of their marriage, they lived in Omaha and La Vista. They later moved to Lincoln so Ray could attend classes at UNL. When he graduated in 1968, they moved to Columbus for his job, and then moved again to Broken Bow after Ray was promoted. In 1996 they moved to Millard; it was a bittersweet move for Joan. She loved the big house they had in Broken Bow, but she was also ready to be back in a bigger city. Joan generally worked as an office manager, but was also very proud of the fact that she had her Real Estate License. Her true calling, however, was working at Mom’s Day Out at Bethany Lutheran where she was known as “Ms. Joan”. In her free time, she enjoyed knitting, playing the organ, baking (especially pies), and word puzzles. She also loved animals, dogs in particular, and spending time with/caring for babies and children. Spending time with her children, grandchildren, and great-grandchildren was one of her greatest joys. Home improvement projects were constantly underway in her home; her family joked that if they sat still for too long, they would get painted into place. Joan once joined a bowling league; her team didn’t do so well. They finished last in their league, so on the last night her team all dressed up in skunk costumes because they got “skunked”! Husker football was Joan’s favorite sport to watch, and she loved to cheer them on. She also liked to listen to classical music, enjoyed the movie, Pride and Prejudice and would watch Hallmark Christmas movies no matter what time of the year it was. Olive Garden was her favorite restaurant, but Joan was an adventurous eater, and often experimented with food. However, she did not like pancakes or biscuits. She did enjoy the occasional scotch and water. Thanksgiving was Joan’s favorite holiday and she looked forward to hosting her whole family every year. The chaos of a house full of rambunctious children didn’t bother her at all, but if anyone tried to start “toilet talk” at the table, she was quick to scold them. One year, George and Anna thought they would host Thanksgiving. As politely as possible, Joan let them know that while they had done a fine job, she would be hosting all future Thanksgivings. Joan was an intelligent, hard-working, and resourceful woman. Once when she grew impatient waiting for help, she figured out a way to move an upright piano on her own. She was a beautiful person who loved others, she was accepting of everyone and very giving. Joan was also the queen of understatement. If she had dropped an anvil on her foot, she probably would’ve just said her infamous “Whoopsie” and mentioned that it maybe hurt a bit. She was always calm and going with the flow, saying “Okie Dokie”, unless someone messed with her kids or grandkids. When that happened, she turned into a momma bear. Her kids have fond memories of Joan staying up late baking mountains of cookies when they were young, the smell of chocolate chip cookies wafting up the stairs. They won’t forget the story of her going to work one morning and forgetting to turn her car off, only to leave work for lunch to find it still running. It’s lucky they lived in Broken Bow at the time, where no one ever bothered to lock a door. When Ray and Joan were first thinking about their funeral plans, Joan forgot the word for cremation. To get her point across, she said she wanted to be “smoked up” and that later became her go-to word for cremation. Her family will miss these fun moments with Joan and her loving and caring spirit. Joan was preceded in death by her husband, Ray; siblings: John, Charlie, Marvin, Dixie, Zella, and Myron; and parents Leonard and Cora. She is survived by her children: Randy (Susan Asher) Musselman, Marty (Lori Ellen Brainin) Musselman, Mary Jo (Steve) Gall, and George (Anna) Musselman; grandchildren: Amy, Andrew, Angela, Aaron, Madison, and Caroline; great-grandchildren: Adam, Abigail, and Anna; sister, Helen Sulzle; and many nieces and nephews. In lieu of flowers, the family requests donations be made to the Nebraska Humane Society.

Joan was born on December 12, 1934 in Mobridge, SD to Leonard Tucker and Cora (Foer) Tucker. She grew up in Mobridge and attended Mobridge High School where she played the saxophone in the school band, was on the debate team, and was in the... View Obituary & Service Information

The family of Joan Marie Musselman created this Life Tributes page to make it easy to share your memories.

Send flowers to the Musselman family.