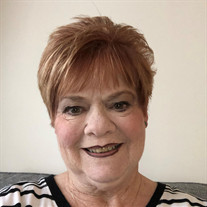 Jo Ann G. Flood was born on October 6, 1945 to Oliver and Lucille Glover in Omaha, NE. She was the youngest of three daughters. The family made their home in Valley, NE and as a child Jo Ann helped with a large family garden and enjoyed spending time with her family. Jo Ann attended Valley High School and as a teenager worked at the Valley Theatre selling popcorn. She participated in many activities in high school and graduated from VHS in 1963. After graduation, Jo Ann attended Wayne State College and majored in nursing. Jo Ann left college to take a position in property accounting at the Union Pacific Railroad in 1966. She retired from the railroad in 2007 after 41 years of service. Jo Ann dated Jerry Flood in high school and after graduation. She married Jerry in February, 1969 and they welcomed their only child, Jacqueline Marie in November of that year. They made their home in Valley, NE and in 1975 moved the family home south of town at TimberLodge Lake, where she lived until 2018, when she moved to Omaha. Jo Ann was very active in the community and philanthropic organizations. She was a member of the Order of the Eastern Star in Valley, NE and later Fremont, NE. She was also a very active member of the National Association of Railway Business Women (NARBW). She was a past Omaha Chapter President and served in that position for 10 years. She was the Omaha Chapter Woman of the Year, The District 2 Woman of the Year and National Woman of the year in 2001. She was also an active member of the Elkhorn Eagles Club #3943 serving as the Auxiliary President and participating in serving weekly meals, the annual Wild Game Feed and St. Patrick’s Day celebrations. Jo Ann was an active bowler all of her life traveling with her girlfriends to State and National Bowling competitions. She loved bowling in the weekly women’s leagues and also in a league with a group of schoolteachers from Valley. Later, she recruited her daughter and they bowled on a three person women’s league for several years in Elkhorn. Jo Ann was also an acknowledged Nebraska Cornhuskers Fan. She and her husband Jerry had tickets in the south end zone since the 1960s. They made an art of tailgating with their friends and spent many an early Saturday morning making sandwiches and packing the van to listen to Beach Boys music on the ride to Lincoln. Jo Ann adored Girls Night Out and had a regular group that would meet once a month for dinner. The group shared many good times at area restaurants and later at each other’s homes. They chose charities to donate to on their birthdays and shared appetizers and the occasional glass of wine. Jo Ann enjoyed these times with her girlfriends. Over the years, Jo Ann always had a side gig, she worked at just about every local watering hole in the area: Valley Alleys/Frontier Lanes, Honest John’s, Bernie’s Bar, Elkhorn Lanes, the Mark and most recently the Elkhorn Eagles Club. She was genuinely a people person and loved meeting new people and making good friends. Jo Ann loved to travel and had many opportunities to do so – bowling teams, cruises to nowhere at the last minute, Las Vegas and in recent years business trips with her daughter. As she was bound to do, Jo Ann made many friends on these trips. In addition to travel, Jo Ann loved to go out to lunch and play a few games of keno. She also loved horse racing, slot machines and opening pickle card tickets. She was in charge of the retirement group power ball tickets and purchased them faithfully for each drawing. Good for her, she was occasionally lucky at these activities. Her most cherished activities involved those of her grandsons, Jacob and Joshua. She loved having them spend the night from the time they were babies. She attended every activity they participated in from the time they could walk all the way through high school. Soccer, baseball, football, track, choir, show choir, band and jazz band. Blistering hot summer days, freezing cold spring mornings – she was there cheering on her loves. She was very proud of her boys and would talk about them to whoever would listen or look at the pictures of them from her wallet. Jo Ann G. Flood passed away on November 27, 2020 at the age of 75 years, one month and 21 days. She is preceded in death by her husband, Jerald W. Flood, her infant granddaughter, Meredith Fee, her parents Oliver and Lucille Glover and her sister, Betty Kindschuh. Jo Ann is survived by her daughter Jacki Flood Fee (Stacy), her grandsons Jacob and Joshua Fee and her sister Barbara Swaim (Highlands Ranch, CO), and her brother-in-law Jack Flood Jr. (Elaine, St. Petersburg, FL), nieces and nephews. Memorials to the family or to Project Harmony - 11949 Q St, Omaha, NE 68137. Visitation will be Friday, January 8, 2021 from 5-7p with family in attendance at Reichmuth Funeral Home 21901 W Maple Rd, Elkhorn, NE 68022. Private burial. Due to Covid restrictions there will be no formal funeral service, a Celebration of Jo Ann’s life will be held later in the spring or summer.

Jo Ann G. Flood was born on October 6, 1945 to Oliver and Lucille Glover in Omaha, NE. She was the youngest of three daughters. The family made their home in Valley, NE and as a child Jo Ann helped with a large family garden and enjoyed spending... View Obituary & Service Information

The family of JoAnn Flood created this Life Tributes page to make it easy to share your memories.

Send flowers to the Flood family.