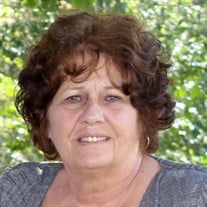 JoAnn Petersen Williams was born November 2, 1950 in Omaha, Nebraska to Wayland and Hannah (Holfelt) Petersen. She was the youngest of four children. JoAnn grew up in Venice, Nebraska, with her brother, Gary, and her sisters Peggy and Judy. She attended District 24 country grade school until 8th grade before attending Waterloo High school. JoAnn met her husband, Bill Williams, of Yutan when she was only 15 years old. They celebrated their 54th wedding anniversary this last June. JoAnn and Bill made their home in Leshara in 1977. They were blessed with two daughters, Kim and Kelly. JoAnn dearly loved her four grandchildren: Chelcie, Chad, Kaitlyn and Nash, and her two great granddaughters: Sidney and Shayla Roth. She also had several nieces and nephews that she was very close to. JoAnn was a homemaker when her children were young and worked several years cleaning homes with her sister Peggy. She also served on the Leshara town board for several years. JoAnn enjoyed refinishing antiques, reupholstering furniture and doing crafts with Bill and her family and friends. She also enjoyed doing home improvement projects with Bill. She was always willing to help with other family and friend home projects too. JoAnn loved to be out in her yard watching hummingbirds that would be on her back deck and growing some of her favorite Zinnia flowers. She had a passion for mowing. She loved to mow not only her own yard but other yards too. She enjoyed spending time with Bill and friends at the Casino and seemed to have good luck! JoAnn had a kind heart. She always was thinking how to help others, from opening her doors for a place to stay to lending a hand to help fix something that was broken. JoAnn loved being with her family and was a great family supporter. Family gatherings were always important and usually held at JoAnn and Bill’s home. Living right next to some of her grandchildren, she liked to say, “It takes a village to raise children”. JoAnn died August 31st at 9am at her home with her family by her side. She had fought liver cancer for over two years. The love that JoAnn has given her family and friends will be missed and cherished. JoAnn is preceded in death by her parents, Wayland and Hannah Petersen; her sisters: Peggy Trofholz and Judy Barnes; and her brother-in-law: Ray Trofholz. She is survived by her husband, Bill; daughters: Kim (husband Tom) Mixan of Plattsmouth and Kelly (husband Joel) Braymen of Leshara; four grandchildren: Chelcie (husband Chase) Roth of Wahoo, Chad Halverson of Bellevue, Kaitlyn (husband Dan) Barth of Omaha, and Nash Braymen of Leshara; two great granddaughters: Sidney and Shayla Roth; her brother, Gary Petersen (wife Suzie) of Fremont; brother-in-law, James Barnes, of Leshara, and several beloved nieces and nephews.

JoAnn Petersen Williams was born November 2, 1950 in Omaha, Nebraska to Wayland and Hannah (Holfelt) Petersen. She was the youngest of four children. JoAnn grew up in Venice, Nebraska, with her brother, Gary, and her sisters Peggy and Judy.... View Obituary & Service Information

The family of JoAnn Williams created this Life Tributes page to make it easy to share your memories.

Send flowers to the Williams family.