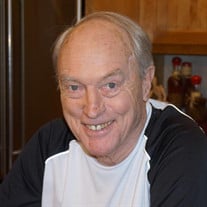 Memorials can be made to The Alzheimer’s Association. John Holloway, age 75 of Omaha, died on Saturday, May 2, 2020. John M. Holloway was born in Columbus Ohio on June 23, 1944 and adopted by John and Eileen Holloway. Throughout his life his family lived in many places; five cities in California, Washington D.C., and his favorite; Honolulu. John was schooled by Jesuits or Christian Brothers from early education through college. After graduating from St. Mary’s High School, he moved to Omaha to attend The Creighton University. In 1964, John placed college on hold to work as a road surveyor in Valdez, Alaska. In 1967 he received a Bachelor of Arts Degree from The Creighton University in History and Psychology. His professional life began after graduation, initially as a pharmaceutical representative. The majority of his career he enjoyed various sales management and managerial positions. In 1989 he purchased Marnyx Fixtures, a small Omaha business, within six years he doubled the company size. He found pride in hiring individuals who needed a second chance at being a successful employee and citizen. His generosity were best expressed through his motto: "I don't employ people, I am responsible to their families." During the latter part of his career he worked part-time, retiring in 2010. On June 3, 1967, he married Lois Sindelar of Howells Nebraska, in a church where three generations of Lois's family had previously been married. After marriage, the couple remained living in Omaha Nebraska and had three daughters, AnnaMarie (Ann), Melissa, and Christine. John was a devoted, active Dad and enjoyed laughter and boisterous behavior. He was always active completing home repairs or projects, camping, playing cribbage, winning at the craps table, hunting, and maintaining three cars during the girl's teenage years. In the summer he tinkered with his stocked fish pond and nurtured his piranha fish in the aquarium. Celebrating holidays were very memorable; embellishing Christmas with his casino winnings to lighting excessive amounts of fireworks with a hand torch on the Fourth of July! As a couple John and Lois enjoyed many vacations around the globe. Traveling to most of the states in North American to many natural wonders of the world; Galápagos Islands, Mt. Everest, Amazon River, Machu Picchu, Niagara Falls, Great Wall of China, Great Barrier Reef, Notre Dame - Paris and South African reserve. As an engaged and loving grandfather he enjoyed attending his four grandchildren's sporting and community events. Wake serve will be led by Father Moser at 5:00 p.m. followed by visitation and open forum of memory sharing until 7:00 p.m. on Tuesday, May 5, 2020 at Reichmuth Funeral Home, 21901 W. Maple Rd. Elkhorn, Nebraska. For those whom are unable to attend either service, you may complete an online form to send a memory which will be read out loud during the Visitation on Tuesday, May 5, 2020: https://forms.office.com/Pages/ResponsePage.aspx?id=QImihGS0w0G6O7T6ZmW8BXuxjYgs_FtElvO0qO-BzMtUNExSMDhMMU1FRDhKOEVGQU5CWktDRVlHQi4u The funeral service will be held on Wednesday, May 6, 2020 at 10:30 a.m. at St. Patrick's Church, 20500 W. Maple Road, Elkhorn, Nebraska. John will be laid to rest at Flower Hill Cemetery. He was preceded in death by his parents, John (Jack) and Eileen Holloway; brother, Christopher Holloway; sister Eileen (Holloway) Palavos; and son-in-law, Thomas Manning. John is survived by his wife, Lois Holloway of Omaha, Nebraska; children Ann Vigal and husband Scott of Omaha Nebraska, Melissa Diers and husband Bob of Omaha, Nebraska; Christine Holloway of Chicago, Illinois. Four grandchildren; Jenna and Aaron Vigal and Ian and Alec Diers. Due to the COVID-19 restrictions, please adhere to the directive of the funeral home staff and ushers.

Memorials can be made to The Alzheimer&#8217;s Association. John Holloway, age 75 of Omaha, died on Saturday, May 2, 2020. John M. Holloway was born in Columbus Ohio on June 23, 1944 and adopted by John and Eileen Holloway. Throughout his... View Obituary & Service Information

The family of John M. Holloway created this Life Tributes page to make it easy to share your memories.

Memorials can be made to The Alzheimer’s Association.

Send flowers to the Holloway family.