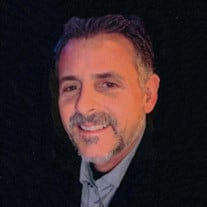 John M. Meyer, of Omaha Nebraska, went to his heavenly home on Wednesday, March 16, 2022. He was 59. He was the husband of Estelle (Stella) Meyer, who survives him. John is also survived by daughter Cassondra Taber (Nick), son Andrew Meyer (Katelyn), son Alex Meyer (Jamie), and son Joshua Meyer (Hanna). He will be forever remembered and loved by his eight grandchildren: Avril, Vera, Audrey, Emma, Vincent, Anderson, Tessa, and baby girl coming in May. There was nothing he wouldn't have done for his family. It is hard to imagine life without him. Born in Waterloo, Iowa, John was the son of the late John Meyer (Jackie) and Sally Shinn (Steve). He was the oldest brother to sisters Laura Jane Gunkle (Chet), and Lisa D'Angelo (Dave). He was preceded in death by his brother, Stephen Meyer. He was dearly loved by his extended family, including aunts, uncles, cousins, and friends. John was a follower of Christ. He knew and was known by God. At a young age, John professed his faith in Jesus for the forgiveness of his sins. Though John is now absent of his body, he is now present with our Lord in Heaven. We grieve with hope because of the promise of Heaven. "He lifted me from the pit of despair, out of the muck and mire; He set my feet upon a rock and made my footsteps firm" (Psalm 40:2). Having felt called to ministry, John spent many years leading worship and preaching the gospel. John was known for his beautiful singing voice. When he wasn't playing the guitar and singing hymns, he was playing and singing to Van Halen. He knew just about every classic rock song ever made. He also loved the outdoors and was his happiest when fishing at Glendalough State Park, in Battle Lake, Minnesota. A Celebration of Life service will be held on April 1, 2022 11:00am Harvest Community Church 3903 Cuming St. in Omaha, NE 68131 A Visitation will be held on March 31, 2022 4-7 pm Reichmuth Funeral Home 21901 W Maple Road Elkhorn, NE 68022 "For God so loved the world that he gave His only Son, that whoever believes in him should not perish but have eternal life." John 3: 16

John M. Meyer, of Omaha Nebraska, went to his heavenly home on Wednesday, March 16, 2022. He was 59. He was the husband of Estelle (Stella) Meyer, who survives him. John is also survived by daughter Cassondra Taber (Nick), son Andrew... View Obituary & Service Information

The family of John Mark Meyer created this Life Tributes page to make it easy to share your memories.

John M. Meyer, of Omaha Nebraska, went to his heavenly home on...

Send flowers to the Meyer family.