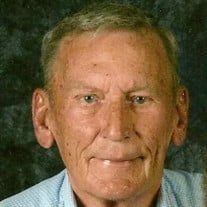 Joseph “Ted” Kirby Ted Kirby, age 87 of Bennington, NE died on Sunday, November 10, 2019 at Methodist Hospital in Omaha. He was born the son of George and Edna (Potts) Kirby on June 18, 1932 in Red Oak, Iowa. Elliott, Iowa was home when he was growing up where in 1950, he was the Captain of the High School Football team, which went undefeated. Growing up he enjoyed many different things, like wood working, sports, fishing and traveling with his family. After graduating from High School in 1951, he attended Peru State Teachers College where he received his BA degree, then later went to the University of Nebraska at Lincoln for his Master’s Degree in Education. Ted served his country in the US Navy from 1952 to 1956 during the Korean Conflict and spent time on the USS Valley Forge as an Interior Electrician. Then on August 17, 1958, Ted was united in marriage to Suzanne M. Clauson in Stanton, Iowa and to this union, two children were born, Jon Carl and Ann Margaret. They would make their home in Omaha, and later Bennington, Nebraska. He was a school teacher/counselor from 1962 till 1994 when he retired at McMillan Jr High in Omaha, NE. He was a member of NEA, NSEA, OEA, American Legion, and St. John’s Lutheran Church in Bennington where he also served on the Church Council for 3 years. Ted would continue his love for wood working, watching sports, camping and traveling with this family and over 30 years of fishing trips to Minnesota. Family was one of the most important things in his life, and he was most happy during those family times and Holiday gatherings, He was preceded in death by: his parents, George and Edna (Potts) Kirby; his wife, Suzanne Kirby; son, Jon Kirby and a grandson, Jacob Kirby. Ted is survived by: his daughter, Annie Kirby of Blair, NE; granddaughters Alisha Bainbridge (Nathan) and their children, Genevieve, George and Thomas Bainbridge all of Wichita, KS; Andrea Kirby and her fiancé Nate Case of Overland Park, KS; daughter-in-law, Rita Kirby of Olathe, KS; and brother and sister-in-law, George Robert Kirby (Sandy), Dayton, OH. Memorials can be made to the Bennington Library and mailed to the Reichmuth Funeral Home in Elkhorn.

The family of Joseph "Ted" Kirby created this Life Tributes page to make it easy to share your memories.

Send flowers to the Kirby family.