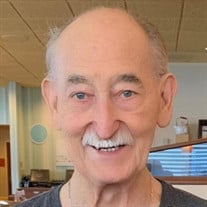 Memorials can be made to the family for later designation to Veterans Organizations. life stream available at https://webcasts.lifetributes.com/1137463 Joe was born June 1, 1941 to Leo and Rose (Framke) Ramsey. He was the seventh of eight... View Obituary & Service Information

The family of Joseph Eugene Ramsey created this Life Tributes page to make it easy to share your memories.

Memorials can be made to the family for later designation to...

Send flowers to the Ramsey family.