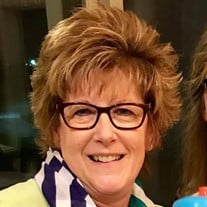 Judi was born the oldest child of Virgil “Fish” and Rita Garwood in 1957 in Cedar Rapids, Iowa. She didn’t have much time to enjoy being an only child before sisters Lori, Patti, Cyndi and brother Scott joined the family. In middle school, Judi enrolled in sewing lessons, learning to sew clothing, window treatments, costumes and so much more for herself and others. Sewing for others, especially her children and grandchildren, brought her tremendous joy. She graduated from Kennedy High School in 1976 and continued her education at the University of Iowa where she obtained a degree in Home Economics and cemented herself as a lifelong Iowa Hawkeye fan. She began working at Rockwell Collins in the summer of 1978 where she met the love of her life, Alan Boldra. With a subtle encouragement from Judi, Alan proposed in 1980 and they married in 1981. The newlyweds moved to Omaha, Nebraska a few short years later where Judi worked as a registered dietitian. Judi and Alan welcomed daughter, Jennifer Wynn, in 1985 and son, Kyle Robert, in 1987. While she was trained as a registered dietitian, her first true love was being Jenni and Kyle’s mom. Throughout their 37 years of marriage, Judi and Alan were partners in many things, including nearly 14 years of successful business ownership. Together, they retired in 2005 and kicked off the next phase of life by moving to a house on Ginger Cove lake just outside Valley, Nebraska. For nearly 10 years, they enjoyed “island life” where neighbors and Twin Rivers YMCA-goers became close friends. Judi began her most cherished role as “Mimi” to grandson Peyton in 2014, followed by Parker in 2017 and Libby in 2018. She was thrilled to know grandchild #4 is due in October 2019. Her grandchildren were her pride and joy. Judi’s many talents, her beauty and selflessness will be greatly missed by her family, friends, and all who came to know her. We love you, Mimi. Judith A. “Judi” Boldra, age 61, of Elkhorn, died 7/14/19. Preceded in death by parents Virgil “Fish” & Rita Garwood. Survived by husband Alan of Elkhorn; daughter and son-in-law Jenni & Adam Stoll of Omaha; son and daughter-in-law Kyle & Anna Boldra of Omaha; grandchildren Peyton, Parker, and Libby Boldra, and Baby Stoll; siblings Lori (Pat) Dolan, Patti Garwood, Cyndi (John) Hemesath, Scott Garwood; nieces, nephew, and many friends. Judi was a loving wife, mom, sister and Mimi. She was passionate about many things - traveling, entertaining and sewing among them - but she was most passionate about her family. She is greatly missed. Funeral service 11 AM Thursday at the funeral home in Elkhorn, followed by a luncheon in the same location. Visitation Wednesday from 4-8 PM with family receiving friends from 6-8 at the funeral home. Memorials to the family.

Judi was born the oldest child of Virgil &#8220;Fish&#8221; and Rita Garwood in 1957 in Cedar Rapids, Iowa. She didn&#8217;t have much time to enjoy being an only child before sisters Lori, Patti, Cyndi and brother Scott joined the family. In... View Obituary & Service Information

The family of Judi Boldra created this Life Tributes page to make it easy to share your memories.

Judi was born the oldest child of Virgil “Fish” and Rita Garwood...

Send flowers to the Boldra family.