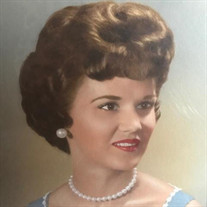 In loving memory of Judith Louise BRUNO Judith BRUNO was born June 21, 1939 to her parents Louis and Alta Cramer. She has two sisters, Carmen Housley and Joan Johnson. Judith was preceded in death by her parents Louis and Alta Cramer and mother and father-in-law Frank and Louise Bruno. Judith married Louis Bruno on August 13, 1954. They had been married 64 years and were blessed with four children Joe Bruno, Kathy (Keith) Butcher, Lori (Terry) Lee, and Steve (Karen) Bruno, 9 grandchildren, 16 great grandchildren along with seven nieces, nephews, and cousins. In her younger years Judith and Louis owned a gas station. She also did house cleaning to help support her family. She retired in her early 70s. Judith was a stay-at-home mom to raise her four children. She was such a loving mother and great friend. She enjoyed making family Sunday dinners and baking, and making holidays special. She also enjoyed camping, fishing, shopping, motorcycle riding, and having friends over. In her later years of her life, Judith enjoyed going out to eat, going to casinos, singing to karaoke, going to garage sales, shopping, and loved being with her family and friends. Judith lost her battle to cancer on Wednesday, January 6, 2020 at the age of 81 years old

The family of Judith Louise Bruno created this Life Tributes page to make it easy to share your memories.

Send flowers to the Bruno family.