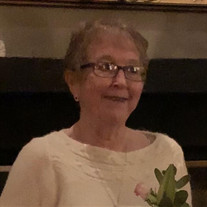 Memorials to Mosaic at Bethphage, Axtell, NE or Westside Church Benevolance Fund Judith Fischer King was born on January 4, 1939 in Omaha, Nebraska to Carl and Ruth (Richards) Fischer. She spent her early years in Ashland and after a tragic accident took her parents lives, she and her sister moved to Omaha and were raised by relatives, Margaret and Herb Lawder. Judy graduated from Omaha Central High School in 1957. She was active in the Theatre group and Road Show plus she enjoyed the company of a close knit group of friends, many who are still close today. She went on to study at Omaha University for a couple of years. Judy worked at Northwestern Bell where she met Terry King and they were married on May 20, 1961 at First Baptist Church in Omaha and they were blessed with three sons: Bryan, Rich and Steve. Other than a short time living in Des Moines, Iowa, Judy and Terry have made their home in Omaha. After working at Northwestern Bell, Judy took time off to raise her family. After the boys were grown, Judy went back to work at the Nebraska Medical Center, running their Family Planning Program and WIC Clinic until her retirement in 2000. Not to remain idle, Judy went to work at Audrey’s Gift Shop. Judy collected a number of memorabilia including Angels and Beanie Babies. She will be remembered as a dedicated, loving wife, mother and grandmother with a strong Christian faith and devotion to the Lord. Judy loved to follow the activities of her children and grandchildren and an occasional trip to the casino. Always a Prayer Warrior, she was often involved in her church by creating or upgrading their “Prayer Rooms” and an advocate for traditional worship. Growing up near 45th and Leavenworth, Judy was a regular customer at LaCasa Pizza. Judy passed away on June 27, 2019 at the Methodist Hospital in Omaha, Nebraska at the age of 80 years, 5 months and 23 days. She was preceded in death by her parents Carl and Ruth and a granddaughter Kelsey. Judy is survived by her husband Terry; sons Bryan of Ft. Worth, Texas, Richard (Denise Kopaska) of W. Des Moines, Iowa and Steve (Susie) of Omaha; 5 grandchildren and 1 great grandson; sister Jeaninne (Walt) Linder of Shawnee, KS.

Memorials to Mosaic at Bethphage, Axtell, NE or Westside Church Benevolance Fund Judith Fischer King was born on January 4, 1939 in Omaha, Nebraska to Carl and Ruth (Richards) Fischer. She spent her early years in Ashland and after a tragic... View Obituary & Service Information

The family of Judith King created this Life Tributes page to make it easy to share your memories.

Memorials to Mosaic at Bethphage, Axtell, NE or Westside Church...

Send flowers to the King family.