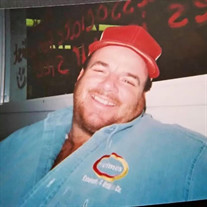 Justin "Layne" Callaway was born April 5th 1961 to John and Loretta Callaway. He was the youngest and the best of 4 siblings. Grew up in west Omaha, he went to Beverage Elementary School and Waterloo High School. In his teenage years he moved out to Elk City where he lived with his older brother. He was married to Lynn in 1980 and remained married until 1996. Together they had 2 daughters Justine and Jordyn. Layne remained living in Elk City until the day he passed away. He was his mom’s best friend, they took care of each other. and she had a lot for him to do but he always did it with a smile on his face and sweat dripping off his body. his youngest daughter Jordyn remained living with him until she graduated and that is when the new love of his life came into the picture, his dog Libby. Libby was stuck by his side from the moment they met and he never was a animal person but Libby wasn't just a dog she was his life partner. She took just as much care of him as he did of her. Through out Layne’s life he worked in many different areas of heavy machine operator to semi driver. He never let anything hold him back. If he didn't know how to do something he would figure out how and do it. The last business he started was Callaway house and building movers. Layne was very passionate about this, he loved the challenge and the awe factor of moving huge buildings or houses. The last 7 years of his life Llayne battled many health challenges, he had diabetes, 2 torn rotator cuffs, cml luekemia, weird nipple burning (people who know him will laugh) arthritis, back problems. I think if he was here he could keep the list going and even through all that pain he never hesitated to lend a helping hand to anybody. Layne could make friends anywhere he went, he loved his friends and thought the world of them. His sense of humor was unlike anything else. Layne has 9 grandchildren on earth and 2 grandchildren in heaven. Justines children-Antonio, Israel, Gaby, Jovani, Eleazar, Yessenia, Nyeli Jordyns children- Dianna and Christian. Misael and Damion are in heaven.

Justin "Layne" Callaway was born April 5th 1961 to John and Loretta Callaway. He was the youngest and the best of 4 siblings. Grew up in west Omaha, he went to Beverage Elementary School and Waterloo High School. In his teenage years he moved... View Obituary & Service Information

The family of Justin "Layne" Callaway created this Life Tributes page to make it easy to share your memories.

Send flowers to the Callaway family.