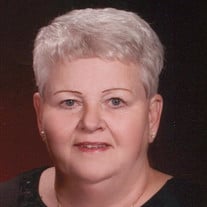 Kathy was born in Odebolt, Iowa on April 28, 1943 to Nora (McDonough) and Carl Wieborg. After high school, she moved to Omaha, Nebraska to attend Business School. She became a member of the LaSalle Club, where she and John met. They were married on January 18, 1970 and their union was blessed with four children: Ann Marie, John Jr., Amy, and Jeanette. She wore many hats, including raising her children while working full-time at the apartments and Sundowner Bar that she and John owned. Kathy enjoyed the winters she and John spent together in Arizona for the past 25 years. She spent her free time knitting, crocheting, making pottery and sewing. Kathy was also an avid bowler and golfer, with a hole-in-one to prove it! Involvement with the Catholic Church was a large part of Kathy’s life. She was a very active member in both the Omaha and Greater Phoenix areas; she joined prayer groups, the decorating committee, prison ministry and volunteered in numerous ways. One of her most special moments was viewing the statue of Mary on Apparition Hill, a staple of her three pilgrimages to the Holy land of Medjugorje. Most important to Kathy were her family and friends. She loved to spend as much time as possible with her children and grandchildren. Kathy was generous and willing to help those in need. She served as a caretaker to her elderly parents, as well as others who needed help. During the Bosnian War, Kathy and John were hosts to Omer and Zineta Coric, along with their three children. They became her adopted family and have continued to hold a special place in her heart. In addition, Kathy was a good joker - some would say rather witty - with a gift for raising people’s spirits. Everyone she met collected funny stories to share. Kathy was preceded in death by her parents, Carl and Nora Wieborg and daughter, Jeanette Sabaliauskas. She is survived by husband, John Sabaliauskas; children: Ann Marie Baker (Randy), John Sabaliauskas Jr. (Holly) and Amy Urzendowski (Dan); grandchildren: Sydney and Nathan Urzendowski, Nora and Alice Baker, and Jolie and Avery Sabaliauskas; and brother, Jim Wieborg (Bonnie). Funeral Mass will be live streamed on St. Patrick's YouTube Channel. Memorials may be directed to Pro Sanctity or St. Patrick's Church.

Kathy was born in Odebolt, Iowa on April 28, 1943 to Nora (McDonough) and Carl Wieborg. After high school, she moved to Omaha, Nebraska to attend Business School. She became a member of the LaSalle Club, where she and John met. They were married... View Obituary & Service Information

The family of Kathleen Ann Sabaliauskas created this Life Tributes page to make it easy to share your memories.

Send flowers to the Sabaliauskas family.