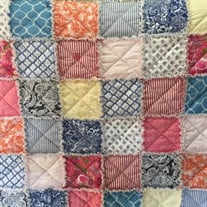 Kathryn was born on November 27, 1956 in Omaha, NE to Richard Rouse and Joann Rouse (Rashid). She grew up in Omaha and attended Mercy High School. After high school, she earned her degree in Sociology at Hastings College. On August 31st, 1985 she married the love of her life, James “Jim” Gayley in Lincoln, NE. Their marriage was blessed with a son, Ukiah Gayley. Quilting was a favorite hobby of Kathryn’s, and she made many beautiful quilts throughout the years. She also liked to stay active with the church; she enjoyed participating in prayer groups and the children’s ministry. Kathryn enjoyed listening to instrumental music, especially piano and flute; she wasn’t fond on music with words. Mysteries and horrible, cheesy romances were her two favorite types of movies to watch. Throughout her life, she fervently hated fish and chips, until she gave it a chance at Upstream Brewing Company a few years ago. After that night, it became one of her favorite foods. Kathryn tried to avoid driving when she didn’t absolutely have to, because she could get lost going in a straight line. When she did drive, she refused to go on Dodge Street between 156th and 204th. Jim will never forget the first time he took Kathryn, a city girl, to his grandparent’s farm, which was out in the middle of nowhere in Colorado. She was shocked and fascinated with how different things were out in the country. His grandfather patiently answered all of the many questions she had for him, even if they all seemed a bit silly to someone who had lived on a farm his whole life. Ukiah will remember how proud his mother was at his high school graduation. She would literally squeal with joy each time an award for him was announced. Her grandchildren will remember the quality time they were able to spend with her. Even though she had just finished chemo, Kathryn was ready to start watching Derek when he was only two months old. From that time on, she watched Derek as well as Devin after he was born at least two days out of every week. Kathryn’s biggest passion was taking care of her family, or anyone else who needed help. She was a compassionate, empathetic, kind, and loving woman who rarely thought of her own needs. Kathryn loved people and spent as much time with family and friends as possible. While you could always count on her to help when you were in need and knew she loved you, Kathryn could also be very snarky and sarcastic. She was very expressive and sometimes would voice her opinion without caring who it would offend. Despite her life-long struggles with anxiety, she was very courageous and was always working to overcome her fears. This courageous attitude helped her remain positive as she battled with cancer and underwent chemo treatments. Kathryn passed away on December 6, 2021 at her home, surrounded by her family that she loved so much. Kathryn is survived by her husband, James “Jim” Gayley; son, Ukiah (Melissa) Gayley; grandchildren, Derek and Devin Gayley; and siblings: Laurie Rouse, Julie (John) Krosko, Steve (Colleen) Rouse, Chris Rouse, and Jenny (Mark) Tourek. Memorials may be directed to Ascera Care Hospice.

Kathryn was born on November 27, 1956 in Omaha, NE to Richard Rouse and Joann Rouse (Rashid). She grew up in Omaha and attended Mercy High School. After high school, she earned her degree in Sociology at Hastings College. On August 31st, 1985... View Obituary & Service Information

The family of Kathryn Marie Gayley created this Life Tributes page to make it easy to share your memories.

Send flowers to the Gayley family.