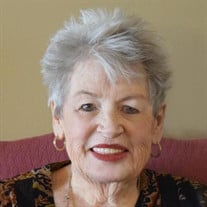 Memorials to St. Jude’s Children’s Hospital, Make-A-Wish Foundation and St. Croix Hospice; Kathryn Margaret Beck Poore was born on December 7, 1938 in Philadelphia, PA to Alfred and Kathryn (Kennedy) Beck. She grew up in the Upper Darby area of Philadelphia where she attended grade school and graduated from Upper Darby High School in 1956. As a student, Kathy participated in dance, choir and stenography clubs. After high school, Kathy worked as a secretary for General Electric’s Missile and Ordinance Division, where she put to use her proficient stenography skills. Kathy followed in her mother’s footsteps and pursued her passion by entering the Philadelphia General Hospital School of Nursing, graduating as a Registered Nurse in 1961. After graduation, Kathy boarded a ship with two friends bound for a European vacation. During their trip, they decided to turn the vacation into a career, working as civilian nurses in a US Army hospital in Frankfurt, Germany. Kathy met Chuck Poore, a US Army Lieutenant stationed at Wurzburg, Germany, at an officers’ party. They fell in love and were married July 14, 1964 in Basel, Switzerland and honeymooned on the island of Majorca off the coast of Spain. Following the wedding, they returned to the US and settled in Omaha, NE. Kathy worked as a Labor and Delivery nurse at Clarkson Hospital and was responsible for starting the first roving I.V. team at the hospital. In 1967, Kathy stopped working to raise a family and she and Chuck were blessed with three children: Bobbi, Chris and Greg. Kathy was a talented seamstress and became an owner and partner in K & K Fashions in Omaha. She volunteered with the Omaha Ballet Company in the costume shop, and eventually became the Head Costume Designer and seamstress for the ballet. Kathy was an avid tennis player and developed lifelong friendships with her tennis group from playing leagues at the Omaha Tennis Club. Kathy enjoyed quilting, working with stained glass, gardening and many other crafts. Kathy and Chuck moved to their Ginger Cove lake home in Valley, NE in 1986, where they loved boat rides and spending time with their Westies, Mitzi and Muffi. She was a member at St. John’s Catholic Church where she served by creating new alter cloths for many years. She loved to golf, was a voracious reader and a dedicated lifelong learner. As an employee, Kathy became a Lifetime Member at Weight Watchers and found success and fun selling Weekenders clothing. Kathy became an avid Husker fan, traveled extensively with Chuck, enjoyed trips to the casino and loved exploring new restaurants and dining out. Kathy and Chuck became winter Texans over 30 years ago where they developed a wonderful group of friends of both local South-Texans and fellow snowbirds. Whether at their condo in Texas or at the lake in Nebraska, Kathy loved to cook and entertain for friends and family, which was usually accompanied by a properly made “Old Fashioned” cocktail. Kathy passed away surrounded by her loving family on Friday, November 1, 2019 at Brookestone Meadows in Elkhorn, NE at the age of 80 years, 10 months and 25 days. She was preceded in death by her parents, Alfred and Kathryn, and siblings, Mary Lipinski, Peter Beck and James Beck. Kathy is survived by her husband, Chuck; son and daughter-in-law, Greg and Laura of Fountain Hills, AZ; son and daughter-in-law, Chris and Sue of Valley, NE and their children Alex and Max; and daughter and son-in-law, Bobbi and Pat Conzet of Mason, OH and their children Jonathan and Andrew. “May the road rise to meet you, and the wind always be at your back, and the rains fall softly on your fields. May God hold you gently in the palm of his hand.” – The Irish Blessing

The family of Kathy Margaret Poore created this Life Tributes page to make it easy to share your memories.

Send flowers to the Poore family.