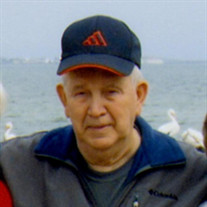 Kropf, Kenneth ‘Kenny’ September 11, 1927-March 13, 2020 Kenny was born September 11, 1927, in Emerson, NE, and passed March 13, 2020, surrounded by his family at the VA Medical Center in Omaha, NE. Kenny graduated from Emerson High School in 1945, after which he immediately enlisted in the Merchant Marines. He served with the Merchant Marines through the end of WWII, and following the war, remained in service until 1948. Kenny then returned to Emerson where he met his sweetheart Madelyn L. Reuter at the roller-skating rink in Wakefield, NE. Kenny and Madelyn were married on November 4, 1949, settling in Emerson where they had three wonderful children. During their time in Emerson, Kenny worked for Kellogg’s Construction Company until 1967. Following Kellogg’s, he went on to the final stop in his career, working for IBP as a plant engineer for 22 years. Throughout his time with IBP, Kenny left his mark in multiple locations across the United States until his retirement in 1989. Following his retirement, Kenny and Madelyn settled in South Sioux City, NE, where they lived together until Madelyn passed away in 2009. Kenny moved to Omaha in 2012, to be closer to family. There he lived in his own home where he was able to enjoy time with his children, grandchildren, and even great grandchildren, as well as his hobbies of gardening, and cooking. On March 13, 2020, he left us to be with the Lord. Kenny was preceded in death by his parents Frederick ‘Fritz’ and Henrietta Kropf, sister Bernice Barto, brothers Ernest ‘Gene’ Kropf and Fred Kropf, and his wife Madelyn. He is survived by daughter, Deborah (Jim) Bezoni; sons, Kevin (Cristina) Kropf and Kalvin (Janet) Kropf; grandchildren, Tracey Bezoni, Brad Bezoni, Crystal Kropf, Carolyn Baker, Jordan Lanning, and Jenna Williams, as well as 16 great grandchildren and many nieces and nephews. Memorials can be made to: To his family and will be designated at a later date. The Reichmuth Funeral Home in Elkhorn, NE is caring for the Kropf family at this time.

The family of Kenneth D Kropf created this Life Tributes page to make it easy to share your memories.

Send flowers to the Kropf family.