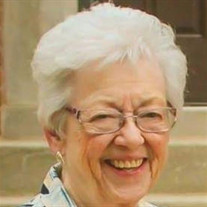 Loa “Jean” Olsen was born on August 4, 1933 to Walt and Ruth (Crosier) Beldin in Lincoln, NE. She grew up in Omaha attending Technical High School and Omaha University. Jean move to Bennington, NE in 1971 and raised her four children there. Jean worked at Bennington Public Schools, Oft’s Hall in Bennington and the Bank of Bennington where she eventually became a loan officer and managed the Premier Club and traveled on many trips around the country. After retirement she continued working as the Board secretary. Everyone knew Jean as “Grandma Jean” and she was a friend to all. She loved to sew and helped her grandchildren with many 4-H projects. She loved spoiling them at Christmas even though she always said she was going to cut back and came back every year with more gifts. She loved to read and was very active in the Bennington Friends of the Library and loved making book bags for the kids. She enjoyed going to the casino with her friends, birthday lunches with the “ladies”, watching the Huskers at the Stumble Inn with the “cackling hens”, and organizing the FBA on Wednesday nights. She also enjoyed being in the Girlie Club during the World Series. Jean passed away peacefully on Friday, April 19 at 4:19 am at the Nebraska Med Center in Omaha. She was preceded in death by her parents, Walt and Ruth, and an infant son, Harold. Jean is survived by her children: Greg (Renee Nesmith) Olsen, Eric (Lori) Olsen, Lynne Lurvey all of Omaha, and David Olsen of Bennington; grandchildren Nikki, Philip, Ashley, Colleen, Elizabeth, Brooke, Grant, Jordan, Abby, and Aidan; great-grandchildren Jaylynn, Courtney, Jennifer, Cadence, Gavin, Ryder, Noah, Colin, McKenna, and Reid. Celebration of Jean’s Life will be held at 11am, Tuesday, April 23, 2019 at Stonebridge Christian Church in Omaha with Pastor Tony Kafka officiating. Visitation will be held on Monday, April 22, 2019 from 4 till 8 pm with the family present from 6 pm until 8 pm at the Reichmuth Funeral Home in Elkhorn. Memorials can be made to: Friends of Bennington Library or Bennington Volunteer Fire Department and left or mailed to the funeral home.

Loa &#8220;Jean&#8221; Olsen was born on August 4, 1933 to Walt and Ruth (Crosier) Beldin in Lincoln, NE. She grew up in Omaha attending Technical High School and Omaha University. Jean move to Bennington, NE in 1971 and raised her four children... View Obituary & Service Information

The family of L. Jean Olsen created this Life Tributes page to make it easy to share your memories.

Send flowers to the Olsen family.