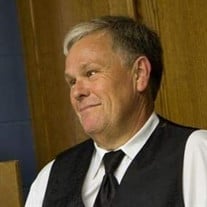 In lieu of flowers, Memorials to the DC West Youth Sports Organization Larry Francis Hascall was born on October 23, 1953 in Omaha, Nebraska to Glen and Mary Ellen (Girken) Hascall. He grew up in Valley where he attended grade school and graduated from Valley High School in 1972. Like many boys in Valley, Larry was involved in football, basketball and baseball and grew up playing all sports with his older brothers. He played on the offensive line in football and as a forward on the basketball team. His nature to avoid the spot-light often caused his hard work and dedication to be overlooked until he received All-Conference Honors in Football. Larry worked in the grocery business for much of his life, retail at first then as a food sales rep in later years before operating his own cleaning service until retirement. He spent most of his life in Valley and when he retired last year, Larry moved to Donna, Texas to enjoy the milder climate. Larry was easygoing, hardworking, sarcastic, funny and selfless. One of his greatest joys was the addition of his son Kyle into his life. As a dad he was always available to play catch or shoot hoops and teaching Kyle to pitch in the backyard. Larry seldom missed Kyle’s activities and had the habit (superstition) of grabbing a Powerade and peanut M&M’s before his baseball games. He loved his friends and family in his own special way. Larry was elated by the newest addition to the family as his granddaughter Henley Hascall arrived a year ago and Larry was here last week to celebrate her first birthday. Larry was an avid fan of classic rock, New York Yankees and Boston Celtics. He enjoyed a variety of foods, a cold Vodka squirt and dinner out at El Bee’s with margarita’s. Larry would often share the ultimate wisdom, “It is, what it is”. Larry passed away unexpectedly at his home in Donna, Texas at the age of 65 years, 10 months and 29 days. He was preceded in death by his parents Glen and Mary Ellen. Larry is survived by his son and daughter-in-law Kyle and Jennifer of Gretna, Nebraska. Granddaughter Henley Hascall. Brothers and sister-in-law Bill of Ridgedale, Missouri and Chuck and Sherrie Hascall of Valley.

In lieu of flowers, Memorials to the DC West Youth Sports Organization Larry Francis Hascall was born on October 23, 1953 in Omaha, Nebraska to Glen and Mary Ellen (Girken) Hascall. He grew up in Valley where he attended grade school and... View Obituary & Service Information

The family of Larry Francis Hascall created this Life Tributes page to make it easy to share your memories.

In lieu of flowers, Memorials to the DC West Youth Sports Organization

Send flowers to the Hascall family.